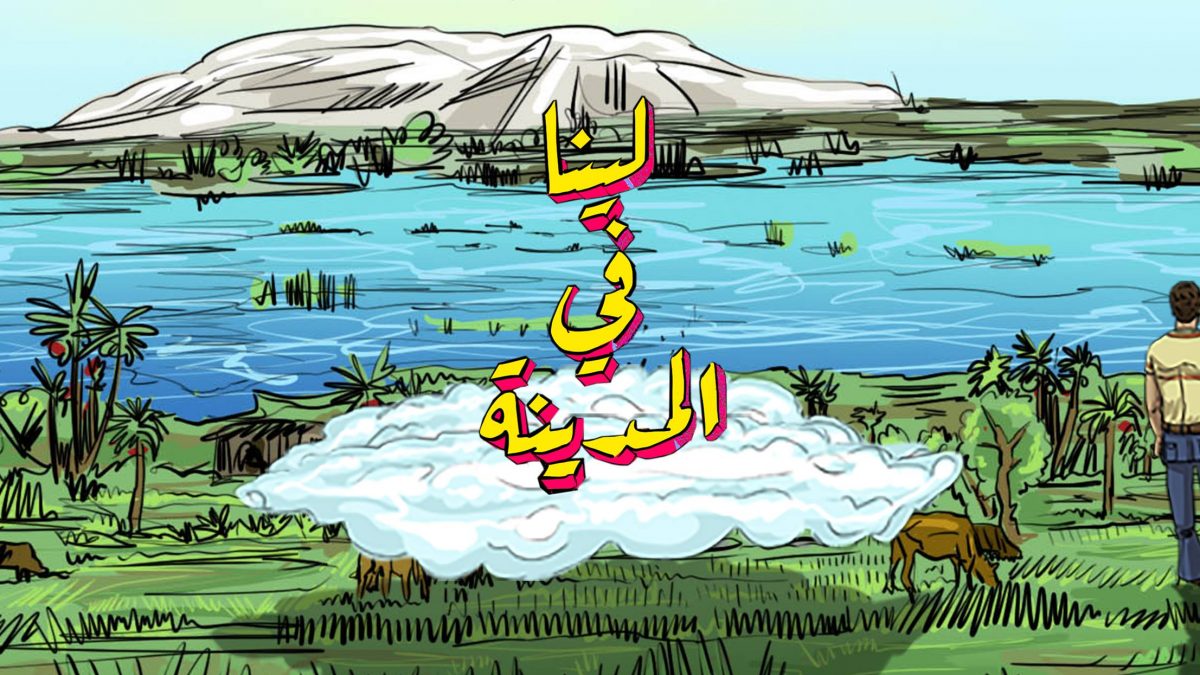 The population of Cairo has grown from 2,5 to 21 million inhabitants since 1950. In a new animation video, Lina fi el-Medina, the urban history of Cairo is told by one of the citizens, Lina. She is herself struggling to cope with the commuting.

A young woman lives in a suburb to the west, 6th of October City, studies at Cairo University in central Cairo, and works as a barista in a café in New Cairo to the east. She is working hard. She is studying hard. Her days are long as the commute can take up to two hours. So, she naps. In her dreams, her questions about the formal and informal structures of Cairo are explained. How did the city develop since the first settlement in Pharaonic times? Why is it so crowded now?

Outlined above is the main storyline of the animation video, Lina fi el-medina (“Lina in the city”) that aired on Youtube last month, and was funded by DEDI. Aiming at providing the citizens of Cairo access to facts and analysis of the urban development of Cairo, each of the four episodes focuses on a topic. The presentation is done using simple language and intuitive illustrations. The videos are accompanied with a list of references, giving the viewer the opportunity to validate the information.

“With this series, we want to give normal citizens the tools to tackle the urban issues of the city by explaining the context it developed within,” explains Ahmed Zaazaa, co-director of the series, and co-founder of the online research platform 10tooba. “We want to provide a better understanding of the city’s core and of the urban policies of the government, and how these are affecting each and every typology of house in the city.”

Each episode is around 6-10 minutes long and can be watched without any previous knowledge of urban development. Designed to educate the viewer through reflections rather than argumentation, the episodes are highly entertaining due to a great deal of humor and irony catching the spirit of crowded Cairo and its people.

“As an urban planner, I am always writing scientific papers, which are only being read by other urban planners, although we are dealing with topics concerning everyone who uses the city. This seems wrong, and we wanted to find a way to share our knowledge and insights in an easy and simple way so everyone can follow,” Ahmed Zaazaa says when asked about the motivation behind the project. “It is important for us that we reach the people on their own level, which is also why we created the storyline of Lina, who is living and working in Cairo, and just wonders ‘how come things are as they are’ while commuting through it.”

Indeed, 83% of the Egyptian workforce spends more than an hour every day commuting to work. This is not only due to the insane amount of traffic but also to the expansion of the city itself. Since the 1950s Cairo has experienced a massive growth of population reaching 21 million inhabitants, which naturally reflects in the city’s skyline: In between the formal neighborhoods of the city, meaning the neighbourhoods built with the awareness of the government, new informal neighborhoods have grown independently. Not finding any more space within the city’s borders, developers expanded new formal settlements in desert areas around Cairo, including the luxurious New Cairo Capital.

Lina fi el-medina is furthermore a attempt to build a bridge of understanding between the different forms of living in Cairo, and to break down the prejudice people may have,” Ahmed Zaazaa adds. “Many people seem to have a utopian perception of life in the new settlements, and don’t necessarily consider that these have downsides too. On the other hand, people living in the fancy areas might be convinced that all informal settlements are dangerous areas, without ever having visited them.”

Today, the informal areas occupy 65% of the built environment in Greater Cairo, and some of the houses have been around for more than 50 years. The inhabitants don’t have formal access to water, electricity, and other utilities.

Never having worked with animations before, the production of Lina fi el-medina has been quite an experience for Ahmed Zaazaa. Starting the project in June 2019, he created a team consisting of an illustrator, an animator, and two sound designers, together with his colleague and co-Director, Omar el-Tawansy. In August the team had a chance to visit the Animation School in Viborg, Denmark, to discuss their work, and obtain the necessary tools to finalize the series. Back in Egypt, they established writing workshops, inviting a new guest to each meeting giving inputs from an “outsider’s” perspective. Guests included a scriptwriter, a theatre director, and a radio presenter.

Lina fi el-medina is only the beginning. Ahmed Zaazaa hopes to do more seasons in the future, dealing with other urban-planning-related topics, so people can keep learning about what’s going on in their city.