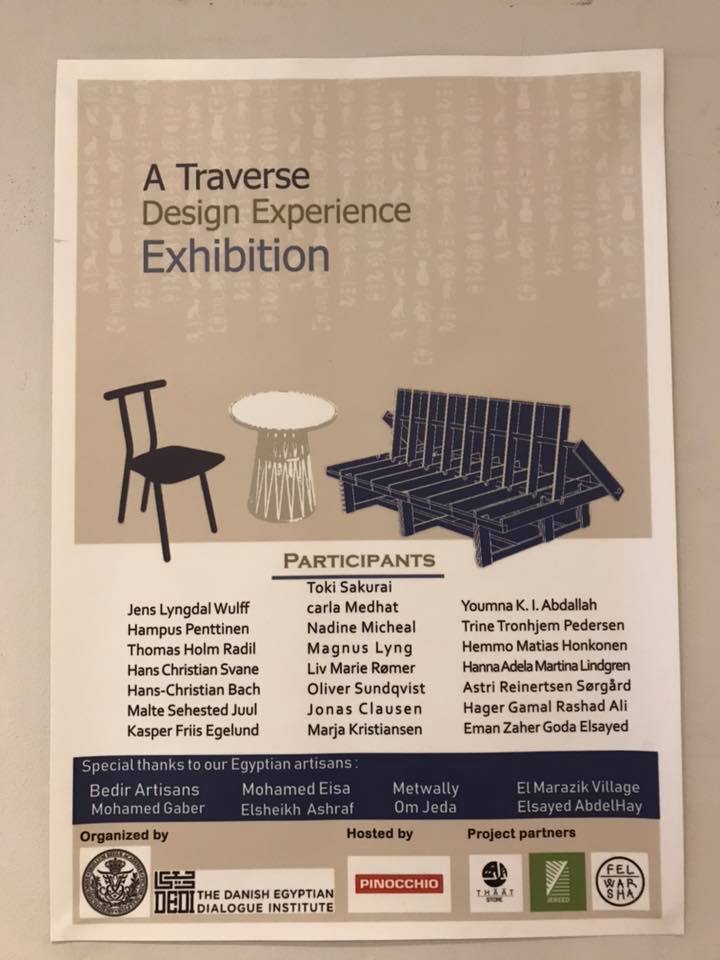 The Danish Egyptian Dialogue Institute has organized the exhibition “A Traverse Design Experience”, that took place in January 2019, at Pinocchio Furniture showroom. The Exhibition came as a third phase of the Institute’s two-year project in the field of the furniture launched in 2017 in collaboration with the Royal Academy of Fine Arts in Copenhagen (KADK).

Egypt has an impressive history of ancient furniture design and a rich textile tradition, which has influenced many European designers and in particular has been a great inspiration for Danish mid-twentieth century designers. Today Egyptian furniture design is mainly influenced by French and Italian styles from the 18th and 19th century, and to a lesser degree by the Egyptian traditions. In all those cases, the designs repeat stylistic elements rather than structural.

Through dialogue and exchange this project aimed at bringing students, design schools, practitioners, and manufacturers together in order to develop new prototypes and methodologies of furniture design that relates to the strong Egyptian tradition, as well as, to a modern language of design suited for an European market. That is, to make modern low cost, high quality furniture based on a strong crafts tradition and on local materials.

Over the period of two years, the project included a number of workshops and field trips conducted by Danish and Egyptian professors and designers.

In November 2018, 20 Danish master students of architecture and design from KADK along with a number of Egyptian design students and professors had a workshop along with a visit to Damietta to study the ancient Egyptian and traditional furniture traditions, textile techniques, and contemporary design and production facilities.