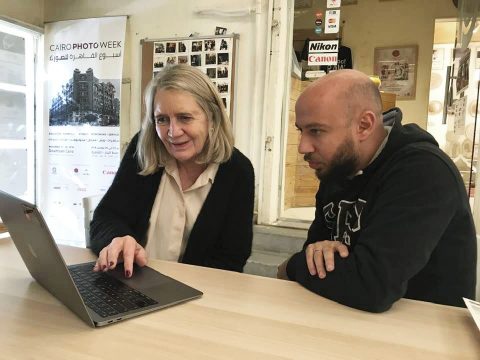 Gitte Luk’s workshop on writing is the third in a row of four workshops for a group of Egyptian photographers. During the workshop the 12 participants were taught how to use observation as a method and how to write reportage articles for their visual stories. They were challenged in day to day writing assignments.

Gitte Luk is a staff teacher of language and journalism at DMJX. She’s working closely with the department of photojournalism, where she often teaches journalistic writing to the photojournalists.

After this workshop the photographers will start doing research on their individual stories, which they will pitch to the teachers at DMJX. During the next four months the participants will work on their stories and in June, Søren Pagter will give the fourth and final workshop, where the stories will be edited.

The workshops have been organized in co-operation with Photopia and with financial support from DEDI, the Danish Egyptian Dialogue Initiative. The first workshop was held by Søren Pagter at Photopia. The second workshop about portrait photography was held by Mads Greve at DEDI.