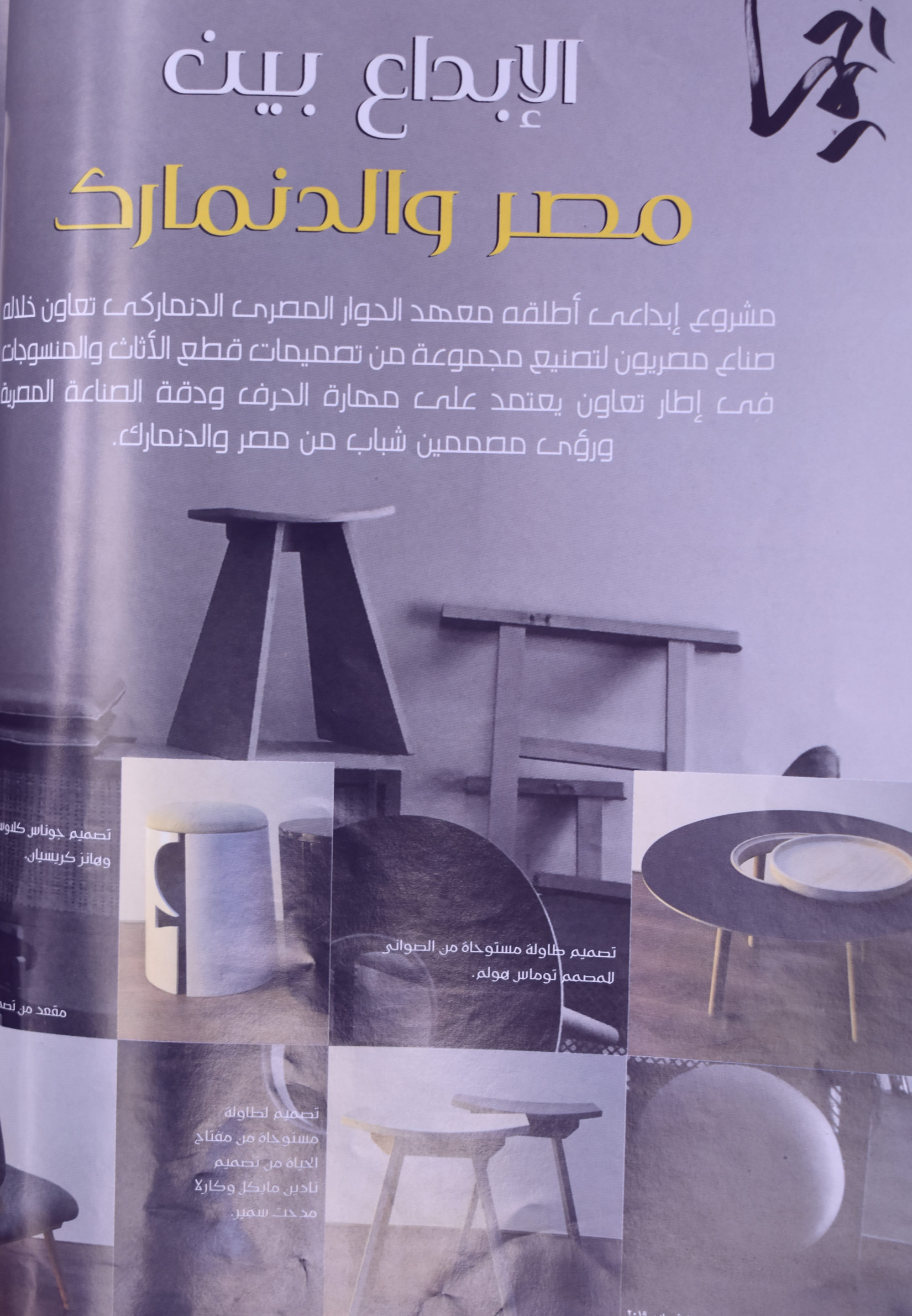 Egyptian and Danish designers have collaborated to produce a collection of furniture and textile designs based on the craftsmanship and the skills of the Egyptian industry, and the visions of young designers from both Egypt and Denmark.

The project has brought the Egyptian professionals innovation while the different designs were made by students from Egyptian and Danish universities. Various designs were made, this has  resulted in eleven pieces of furniture, two of which were designed by Egyptian students, and another four textile pieces designed by students from the Royal Academy of Fine Arts in Copenhagen, Denmark in addition to a group of students from the German University in Cairo and  Faculty of  Applied Arts, Helwan University.

Commenting on that, Hans Chr. Nielsen, Director of the Danish Egyptian Dialogue Institute stated: “We had the idea of ​​cooperation between Egypt and Denmark long time ago, and we spent last year looking for facilities, before and decided to cooperate with Pinocchio manufacturer. Later, we shared our goals and vision with others who work in the field such as Ahmed Badir, Omar Abdel Moneim from “Jerid”  Studio , and Brahyan Abu Zeid from “Zat” studio.

The cooperation was inaugurated by the Royal Academy of Fine Arts in Copenhagen, as the school has a tradition of taking their students on research and design trips to different countries. Several Danish professors have participated at the project as; Dr. Nicolai de Geir, Dr. Grethe Weber, and Dr. Andreas Lund, a long with the participation of

the more than twenty students from Egypt and Denmark”. Nielsen explains that “Egypt was chosen for this project, for its crafts such as pottery, silver, textile and other crafts and the raw materials that Egyptians master, especially as these traditions contain a mix of different methods and materials such as palm leaves, which have been developed and converted into the material of modern furniture, I also believe that Egyptian handicrafts need modern designs in order to be integrated in the daily use”.

Amr Oransa, the Head of the Designing Department at Pinocchio tells that the project began with a visit, where professors and students from the Royal Academy of Fine Arts in Denmark visited the Egyptian Museum, which inspired them when it comes to the manufacturing techniques and raw materials used – not only the symbols and shapes, then the team visited Pinocchio factory in Damietta, and followed the manufacturing process and the final stage of furniture production.

After that, the team returned to Denmark for the design phase. The companies then received the designs and started working on them for a week and finally the exhibition was opened at the Pinocchio gallery. Oransa added that the inspiration from the ancient Egyptian civilization, differed from one students to another. Some chose clear symbols and others relied on the techniques of tethering, knitting and installation invented by the ancient Egyptians, the designs at the same time reflected Danish culture.

Some products were coated with a transparent layer made of soap as a craft technique from Denmark, which gives the pieces a smooth and polished surface that does not attract dust. Various materials were used to create the different pieces as; wood, palm leaves, linen and paper. When the production team had some difficulties obtaining specific color grades and materials for the designs, the manufacturers had to order them. That is why the students had to bring pieces and parts of their designs from other countries so they can achieve the best implementation of the existing designs.

After the completion of the implementation phase, an exhibition entitled “A Traverse Design Experience” was held to present the final products of the project in the fields of furniture and textile design, which combine Danish design traditions and Egyptian production culture. In addition, Hans Chr. Nielsen stressed that a large number of the earlier Danish architects were inspired by the details from the Pharaonic period, among which an iconic chair in Denmark, inspired by the throne of Tutankhamun. So the students’ visit to Cairo and the Egyptian Museum was to inspire to design pieces close to the designs of Egypt and Denmark.

He also added that Damietta was very interesting, where it was great to see the many activities and centers, from the old Abdel Rahman souq, and also the workshops that focus on one type of production. The city also includes the modern and developed factories that meet all the needs of the furniture industry. Damietta, he found, is a unique city with its location connecting it to the Nile and the Mediterranean Sea..