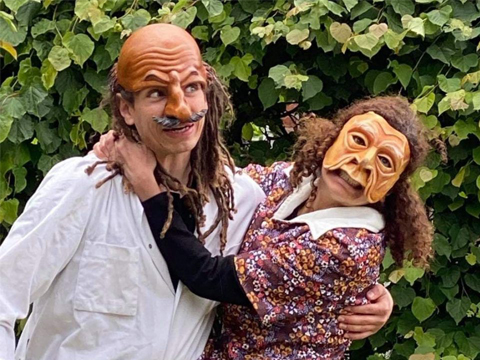 After having explored the classical European styles of physical theatre at the Commedia School in Copenhagen for two years, Reham Ramzy and Raef Sabry are all set to venture into the streets of Cairo as clowns or buffoons.

Dancing like a leaf falling from a tree. Expressing the colour red with just your body. Moving like a dish of eggs with mushrooms. These were just some of the many challenges that Reham Ramzy and Raef Sabry have been faced with during their two-year residency at The Commedia School, a Danish school for physical theatre.

The story about how they ended up in Copenhagen begins with a chance meeting in Cairo. Ruth Lerche, a teacher at Commedia, was giving a workshop when one of the participants suggested to her to visit the recently established Nahda Arts School (NAS). She found to her surprise that the new school was built around the same core principles and artistic spirit as The Commedia School had been working with for about 40 years.

The two schools soon began a collaboration. With support from the Danish-Egyptian Dialogue Initiative, Ruth returned to Cairo with a group of students from Commedia to prepare a joint performance. To further strengthen the new connection, they agreed that two graduates from the NAS school would to come to Denmark and enrol in the two-year program at The Commedia School. This could give them the chance to deepen their understanding of the classical European styles of physical theatre, and explore how they can be adapted to Egyptian society and incorporated in the teaching program at NAS. 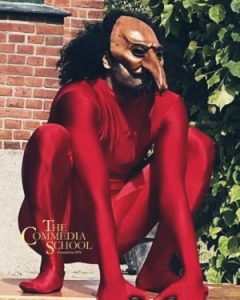 In 2018 Reham Ramzy and Raef Sabry began their studies at Commedia, again with support from the Danish-Egyptian Dialogue Initiative.

“NAS is still a new school, and we are trying to develop a coherent curriculum for a physical theatre grounded in the Egyptian cultural context”, says Raef Sabry.

“Since The Commedia School is one of the oldest schools for physical theatre there is so much we can take with us back to Egypt”.

Physical theatre is based on movement rather than dialogue and on improvisation rather than a script. It has the roots in the Italian genre commedia dell’arte that became most known for its masquerades featuring comedic archetypes such as Harlequin and Pierrot. Physical theatre has evolved to include other styles such as the melodrama and the cabaret, and characters such as the clown and the buffoon. What they all have in common is that they can be performed in any kind of space using little equipment and often have limited dialogue or none at all.

It is however not just a particular form of theatre. It also has a social dimension.

“Our plays are accessible to anyone, and we go out to perform where people live. You don’t need to be well versed in art and literature or to have the means to travel to reach the theatre and pay tickets. It is sometimes called the poor mans’ theatre”, explains Reham Ramzy, who is one of the founders of NAS.

“For our performances we don’t need equipment, lighting, and sound, or even a stage. All we need are our bodies and our imagination. Much of our performances rely completely on body language, and it can therefore be understood by everyone, whether they are children or adults, or wherever they are from, or what languages they speak”.

Such an approach can be especially powerful in a country like Egypt where the world of art can be very distanced from large parts of the population.

“Art is very centralised in Egypt. It is mostly in the capital and even in the capital it is centralised in downtown Cairo. The result is that only a small segment of society attends performances and learn to perform themselves. We go out into communities to perform, and we encourage our students to address issues that might be unfamiliar to themselves, but are very relevant to people in the streets”, says Reham.

Exactly because physical theatre is not taking place within established art institutions and frameworks, there are not many places in the world to study it and little funds to support it. For NAS the cooperation with The Commedia School can therefore have a big impact on the development and sustainability of the new school. 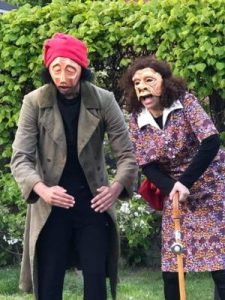 It is an essential part of the program at Commedia that the students learn to create their own shows outside normal theatre settings and become able to shape their own careers as independent performers.

“We need to develop our skills as much as possible. In Egypt the street can be very demanding. It is full of sounds and movements and will almost always be more powerful than you as a performer. You therefore have to work hard to find ways to attract people’s attention”, says Reham Ramzy.

Not everything they have learned in Denmark can be exported directly to Egypt. They will need to adapt the styles to a different audience.

“We have learned some new techniques at The Commedia School that we will try out in Egypt. I believe the melodrama for instance could work really well in an Egyptian setting. But we will have to add our own touch to the classical approach, just like they have done here at the Danish school”, says Raef Sabry.

For The Commedia School the cooperation with NAS has been a great opportunity to explore Egyptian culture and folk tales.

“It has been fantastic to experience how this cooperation has grown. We went from walking together on a small path to now having developed a cultural bridge between Denmark and Egypt. It has opened our eyes to the Egyptian culture and given us a lot of inspiration. It is so important that our students get the chance to immerse them self in different kind of folk tales from all over the world. It both gives you new ideas and make you understand what is universal and can make everyone laugh”, says Ruth Lerche.

Photos: Courtesy of The Commedia School.

You can read more about The Commedia School HERE