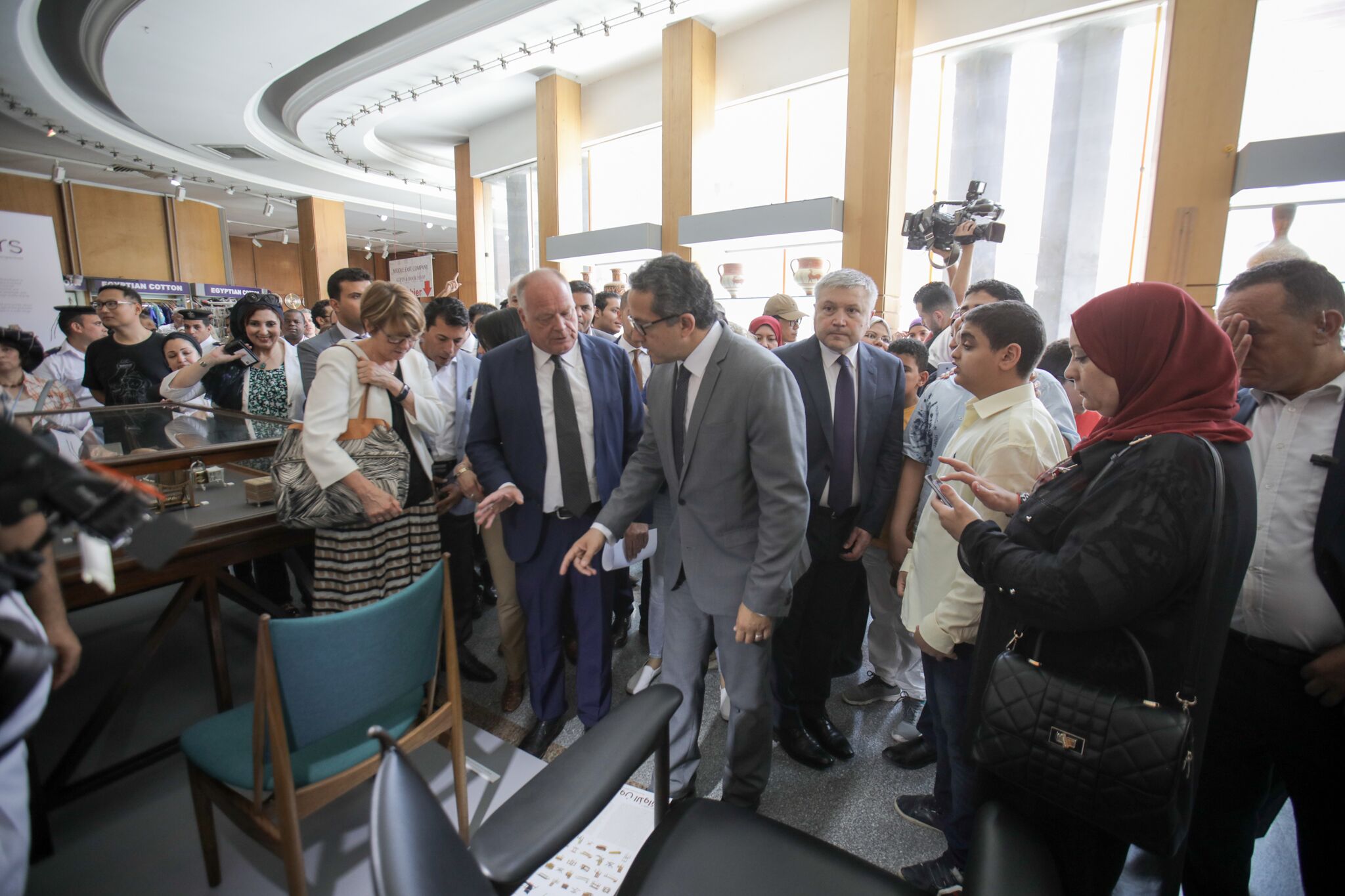 A showcase of the exhibition First Movers – Egyptian Furniture Making in the Age of the Pharaohs and Modern Danish Perspectives opened on the 20th of June at the Egyptian Museum.

The opening was attended by the Egyptian Minister of Antiquities H.E. Dr. Khaled Elanany and the Minister of Tourism H.E. Rania al-Mashat, the Danish Ambassador H.E. Tomas Anker Christensen and number of other ambassadors representing the EU-countries.

The exhibition First Movers presents a selection of the unique study models of ancient Egyptian furniture created by Dr. Dan Svarth from the Royal Danish Academy for Fine Arts in Copenhagen along with modern Danish furniture made by the Danish architect and designer Finn Juhl, which integrate elements from the Pharaonic furniture in their structure and design.

Over a period of nearly 40 years, Dr. Dan Svarth has collected knowledge about the furniture of the Pharaohs, through visiting museums and collections all over the world, including the Egyptian Museum in Cairo. Each study has resulted in detailed drawings and photos of the furniture, and in most cases Dr. Svarth has concluded the work by making a scale model of the furniture. Examples of the models from this unique collection are displayed in order for the visitors to see the work and get a grasp of the techniques and the high standards of the ancient furniture.

The work and interests of Dan Svarth is a part of a long tradition among Danish furniture designers to be inspired by the Pharaohs when making chairs, stools and cupboards. World renown Danish furniture makers such as Ole Wanscher (1903-1985), Poul Kjærholm (1929-1980) and Finn Juhl (1912-1989) made tables or chairs with clear references to the tradition of the Pharaohs, and by displaying four examples of chairs by Finn Juhl the exhibition gives the visitor the possibility of looking into how the inspiration has materialized in the chairs presented.

In connection with the creation of the exhibition a new and enlarged edition of Dr. Dan Svarth’s book “Furniture during the Age of the Pharaohs” (1998) has been published as “First Movers” – the first copies of the reedited book were also presented at the opening.

The exhibition was attended by Dr. Dan Svarth, who had a chance to see his work “come home” to the Egyptian Museum, and the director of One Collection/House of Finn Juhl, who produces the furniture of Finn Juhl today, Mr. Ivan Hansen. It was also attended by the exhibition crew and curators from A. Petersen Collection & Crafts Ms. Kari Svarre and Mr. Anders Petersen, who have curated the exhibition and the opening, and our partners from Egypt Mr. Amr Orensa from Pinocchio Furniture and Yasmine Elwany beside a wide range of other partners and friends of DEDI.

This presentation of the exhibition First Movers will be at the Egyptian Museum from the 20th to the 27th of June 2019, and the exhibition itself is expected to open in Cairo later this year.