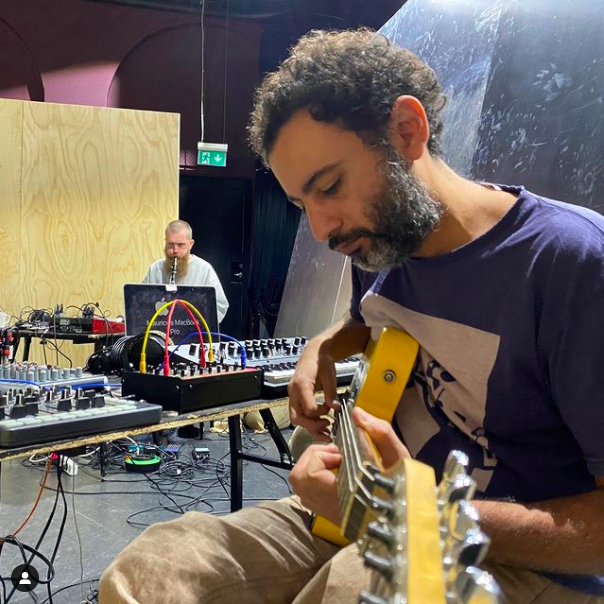 Composing music together: Imagine being inside the speaker with two experimental musicians, their instruments and a shared passion for improvisation. This was the offer to the audience of Gong festival in Copenhagen, when Maurice Louca and Lars Greve performed

Maurice Louca and Lars Greve met for the first time in Copenhagen early September this year. The aim was composing music together and performing during the Gong Festival.

“I had no idea about the outcome. It was enough for me to know that both of us come from the worlds of improvisation and experimentation,” Maurice Louca says.

“There is always a risk that these kinds of experiments won’t go well. However, Lars and I developed a common language and it all turned out to be a great experience,” Maurice Louca adds.

Maurice Louca is considered one of the most gifted composers and musicians in Egypt. Also, he is not unfamiliar in Denmark, having performed with his band Lekhfa at the Roskilde Festival in 2018 and again in 2019 with The Elephantine Band.

“We started off with having different musical languages,” Lars Greve recalls.

“However, it all came very natural. We had five days of rehearsing, sitting together for four hours every day talking about music. So, during these days we got to know each other very deeply on a musical level. We developed a common language that united us,” Lars Greve says. 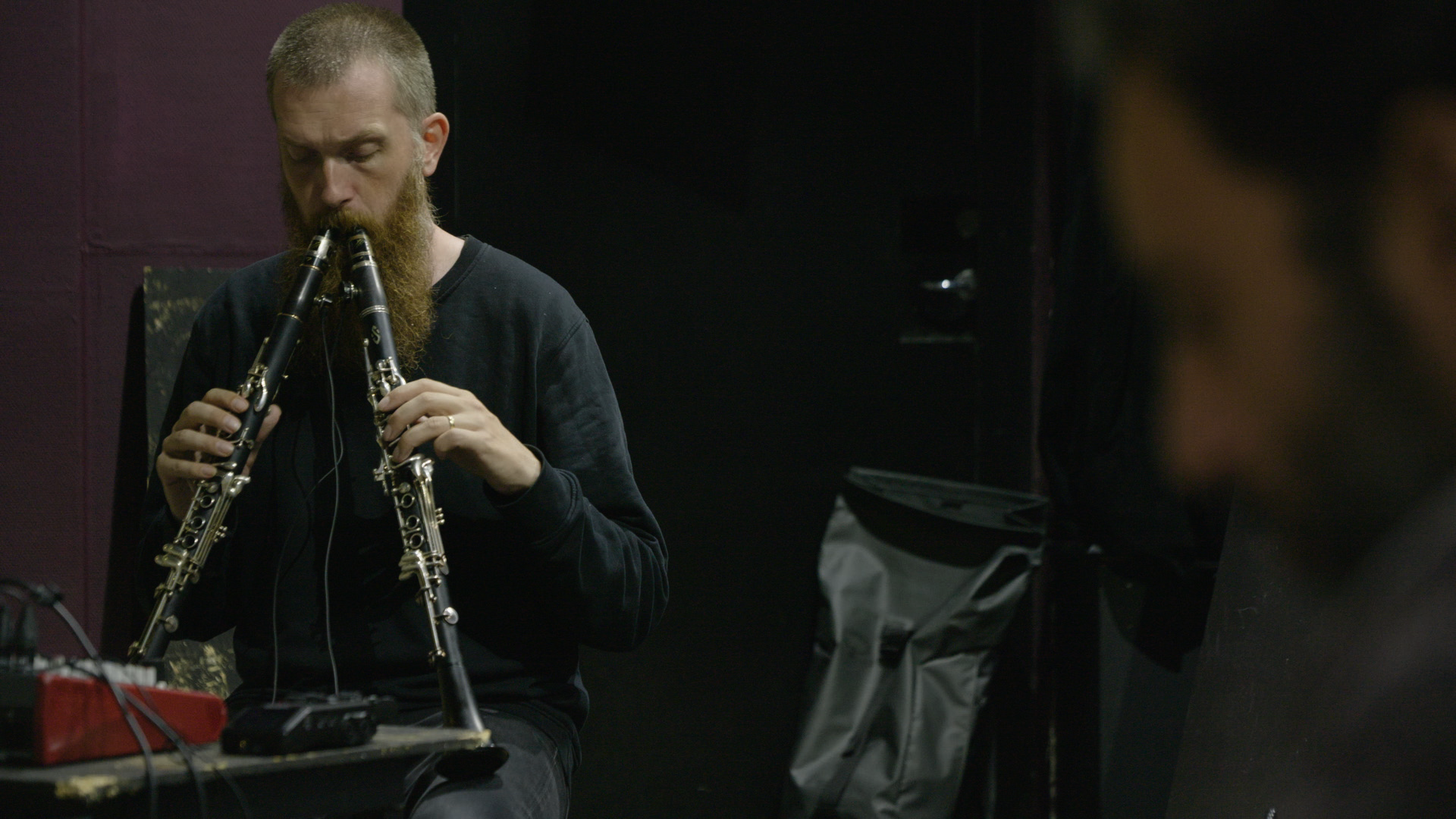 Lars Greve practicing before the performance at Gong Festival in Copenhagen

Lars Greve is a saxophone and clarinet player, teacher and composer and has been nominated for the Danish Music Awards numerous times. When telling about his background and sources of inspiration, the Danish composer highligts his upbringing in the Danish countryside:

“It was just a house in the forest. I grew up listening to the sound of forest, to the sea and this influenced me a lot. The way I play is very much committed to the sound of wind, sea and nature. I am trying to adapt impressions from everywhere,” he explains.

This would seem a far cry from the buzzling megacity of Cairo, where Maurice Louca comes from:

“A very intrusive city,” as he puts it.

“I’m not really thinking about this, when I am composing, but of course the city has an  influence on my music subconsciously,” he adds.

However, when it comes to music, the Danish and the Egyptian composer do not feel their worlds are apart.

“Lars and I are very similar in our personal motivations towards music. We both like to experiment and improvise. We do not represent the different worlds that we come from as much as we play in the large musical spaces that we share.”

When the two musicians met in Copenhagen, Lars Greve introduced a new element to the project: The transducer, a small vibrating device that turn any inanimate object into a speaker.

“The room consisted of wooden walls and metal walls and Lars attached transducers to all of them. The different walls produced different sounds while we played,” Maurice Louca explains.

“We quickly realized that the room was a big part of the project. It was as if we were playing with a third person: the room.” 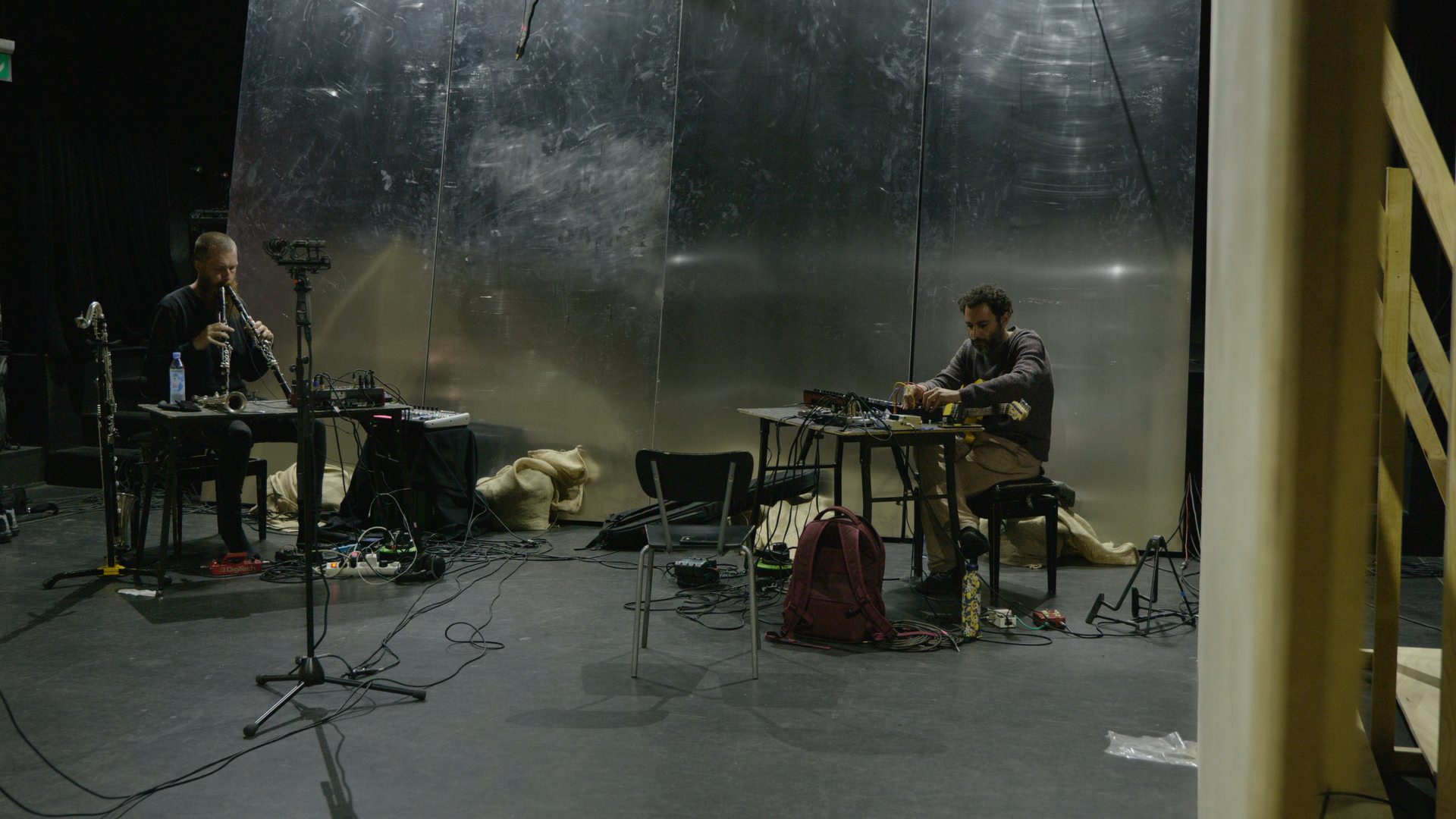 Lars and Maurice created a unique experience for the audience, as they used the walls and ceilings as their ‘third band member’. Photo: Andreas Johnsen // DEDI

“Some frequencies sounded much prettier than usual, others sounded annoying but we were able to control that while playing. With the regular speakers you only need to do the sound check and you already have prior expectations about what the sounds should be like,” Maurice Louca added.

“I felt like we were together inside the speaker. We started to interact with the speaker, touching the walls and going directly to the sound source,” Lars Greve says.

When the two musicians performed at ALICE cph as part of Gong Tomorrow Festival in Copenhagen on September 10th, they invited the audience to walk around the room and live the experience with them.

“It is interesting to me as a musician because I’m playing with the walls and interacting with them and they are acting like a regular speaker,” Lars Greve explains.

“However, the sound produced is different from one wall to another. It was also fun for the audience because they could walk around and the sound they were hearing changed, depending on where they were standing among the walls.”

Lars Greve usually plays with his eyes shut but during the concert,  he would suddenly realize that someone was standing in front of him or beside him.

“People were walking around and being very curious. Experimental music is usually difficult to understand but, in this case, the only thing needed was for people to be curious,” Lars Greve recalls.

Coming up in January is yet another couple of days of composing together and a joint performance, this time in Cairo. 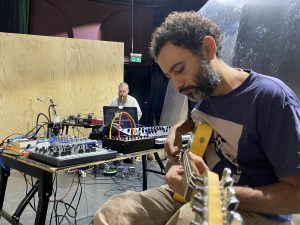 Lars Greve and Maurice Louca met for the first time composing music together in September with the support of DEDI. Photo: Andreas Johnsen // DEDI

“I don’t know about Egypt but in Denmark people can be a little conservative when it comes to concerts; they expect to sit down in a specific place and enjoy the music. But at our concert people were walking around as if we all were a cohesive unit inside a speaker,” Lars Greve says.

“We are planning to try to meet the expectations of the Cairene music audience. Since it’s all about improvising so if people in Cairo prefer to dance we will adapt to this while playing,” he adds.

“We are looking forward to perform in Cairo. It has been  a very inspiring experience on all levels and exceeded all my expectations. Lars and I connected on a personal level and sailed together to different musical levels. We have made a lot of recordings and we will continue playing together. It’s very promising” Maurice Louca says.

Watch or listen to Lars Greve and Maurice Louca:

Watch the videos from their performance at Alice during Gong Festival 2021: