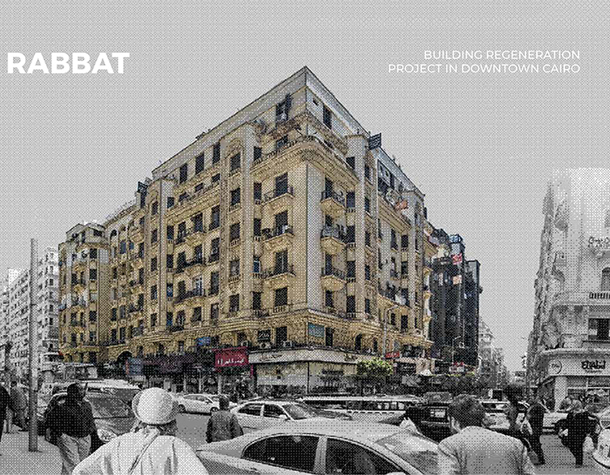 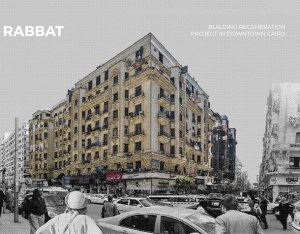 Having a coffee while enjoying music in a rooftop garden in Downtown Cairo. So was the dream of the architects of CLUSTER. Underway, they learned important lessons on modelling urban diplomacy.

Reaching agreement on urban development in Downtown Cairo is a difficult task. It implicates the reconciliation of multiple groups of stakeholders with opposing interests and deep-rooted mistrust.

This is one of the reasons of the sad state of Downtown Cairo that was built by the Khedive Ismail in the 19th and early 20th century. The area was partially modeled on Paris and Vienna. Even though many of the Art Deco buildings have their facades repainted every now and then, these facelifts do not change the fact that most of Downtown Cairo is decaying from the inside. Also, huge spaces in an otherwise prime location are left underdeveloped or even unused.

Since 2011, The Cairo Lab for Urban Studies, Training and Environmental Research (CLUSTER) has worked to try to reverse these dynamics or at least to develop a model for how this could be achieved. The result has been a set of principles for ‘urban diplomacy’ that has been trialled in two pilot projects supported by DEDI. The principles could prove to be crucial for future projects of urban development in Downtown Cairo as well as the city at large.

As CLUSTER concludes in their report on the projects: “The forms of in-between public spaces in which CLUSTER is proposing interventions are not limited to Downtown and can be sources of development potential throughout Cairo.”

In a first phase, CLUSTER focused on passageways as avenues for change. In 2015, they inaugurated the redesigned Kodak and Philips Passageways off Adli Street in Downtown Cairo. This was achieved through the successful inclusion of local stakeholders and based on cooperation between Egyptian and Danish architects and artists.

The new ‘Green Oasis’ and ‘Light Oasis’ in the two passageways were well received by the public. This encouraged CLUSTER and DEDI to further develop the intervention through a second phase. This time the focus was on rooftops as ‘in-between’ spaces with significant potential for development. The Rabbat Building on Sherif Street, built in the 1930’s by a French agency, was chosen as location. 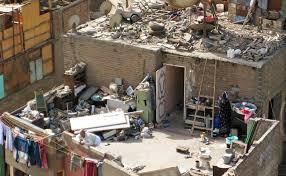 A typical rooftop in Cairo

Like passageways, rooftops are semi-public, forgotten spaces that suffer from infrastructural problems. Yet, they contain significant possibilities for regeneration. Because they are elevated above the street and are privately owned, rooftops are less affected by concerns about noise and security and offer a shelter for public activities.

In the Rabbat Building Regeneration Project, CLUSTER attempted to combine the development of the rooftop with the renovation of the building’s passageway and stairwell. They also included working on restoration of the facade and on creating new signage for shops and hotels in the building. This model aimed to tackle the various issues facing Downtown in an integrated fashion. The hope was that all of this would encourage stakeholders to work on upgrading and regenerating the entire building.

Farming on the roof

Following extensive research, CLUSTER decided to make use of the rooftop for farming. It was envisioned that the rooftop gardens could at the same time serve as a venue for cultural activities, a pop-up restaurant featuring slow-food cuisine, and pilot installations of renewable energy. It was a specific goal that the farms would engage the illegal squatters on the rooftop. They are a very disadvantaged group of people that is most often excluded from any kind of development:

“Rather than evicting illegal squatters on the rooftop, the project envisioned engaging and employing them in the upkeep of the rooftop gardens and renewable energy installations, and potentially employing some of them in prospective pop-up restaurants or cafes on the rooftop“. (CLUSTER project description)

In the Rabbat building, CLUSTER had to engage with numerous stakeholders: from residents, shop owners, and hotels to civil society organizations, real estate developers, and municipal authorities. Normally in Cairo, conflicts of interests between such groups are resolved top-down and reflect the current power dynamics. Meanwhile, CLUSTER had proven in the passageways project that a different approach can be successful. 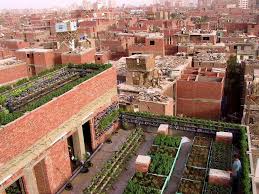 In the passageways project it led to the creation of the ‘passageway board’. This was a new body for public space management that made it possible to mediate conflicting interests and reach a common ground.

In the case of the Rabbat Building, the process was even more demanding. The proposed development would benefit some stakeholders much more than others. To reach a solution CLUSTER had to find ways to mitigate potential damage. CLUSTER also had to find alternative compensation for those on the losing side of the equation.

This diplomatic mission came close to fruition. Meanwhile, several unforeseen events slowly pushed it beyond resolution. Firstly, CLUSTER discovered that the basement of the building had been submerged in sewage for decades. This had caused serious structural damage that made it unsafe to begin the regeneration project. The resulting delay necessitated a renegotiation of the contract with the landlords, and an agreement with them was reached in principle. CLUSTER however discovered that the lawyer working on behalf of the landlords deliberately attempted to obstruct the process. The reason was, that he would not himself benefit from the proposed resolution.

Secondly, the sudden devaluation of the Egyptian pound at the end of 2016 meant that the funds available for the project was suddenly cut in half. This made it impossible to implement the project since the interests of all stakeholders could not be satisfied.

But even if the plans for the rooftop had to be abandoned, the challenges of the second phase helped CLUSTER further test and develop their principles of urban diplomacy. These experiences could prove valuable in future projects and demonstrate the potential of this new model for urban development. As CUSTER concludes in their report on the project:

“Ultimately, the Rabbat Building Regeneration Project sought to offer an alternative to the two prevailing approaches to the revitalization of downtown Cairo today. Acknowledging socio-economic diversity and inclusivity as the hallmarks of Downtown’s character, our project introduces a balanced and layered model of development beyond either aesthetic- or profit-driven approaches.”