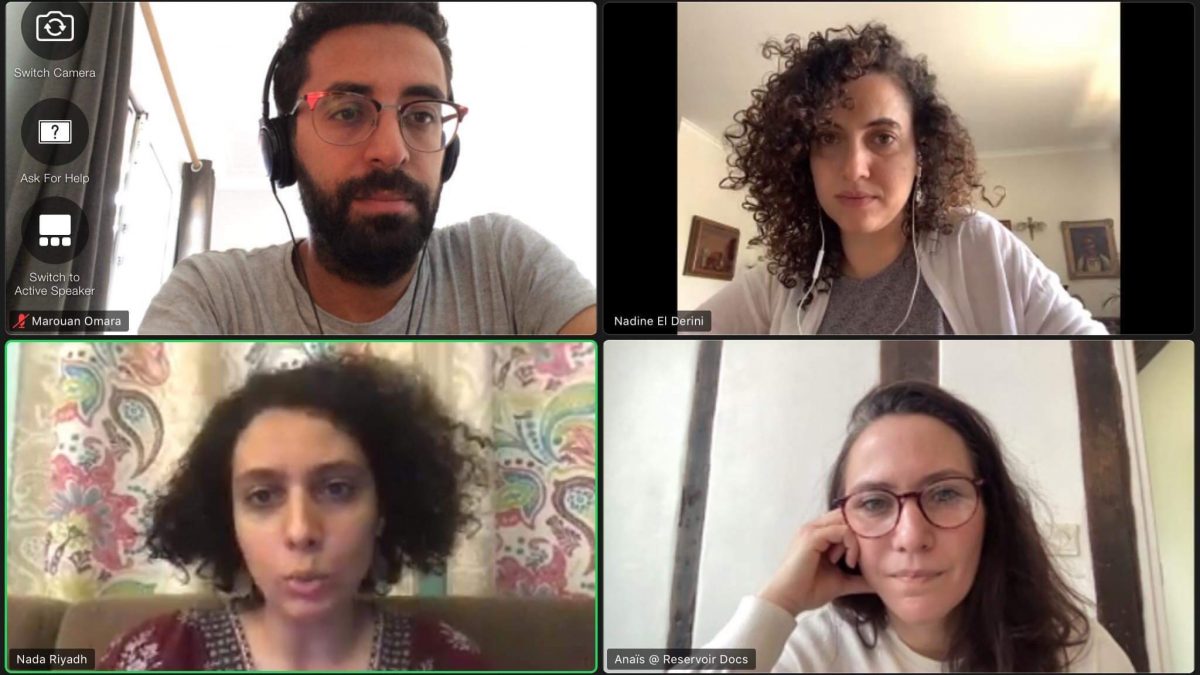 Online session with the Egyptian delegation at CPH:DOX 2021

The screening almost 200 documentary films and having more than 100,000 visitors make the Copenhagen-based documentary film festival CPH:DOX one of the largest of its kind. The sidelines of the festival also offer great networking opportunities for industry professionals with the program CPH:FORUM dedicated to that end. This year, the festival was conducted virtually.

“It’s nice to attend this kind of festival, as you get a feeling of having a network of people who share your passion,” the Egyptian filmmaker Marouan Omara says. “The documentary scene is quite a niche. Documentaries come as a secondary option, or even later. Not just here in Egypt, but all over the world.”

Marouan Omara attended CPH:DOX as one of the four prominent Egyptian filmmakers, producers, and artistic directors in the Egyptian Delegation sponsored by DEDI.

The Cairo-based filmmaker is known for his creative documentary films. His latest feature Dream Away was selected as the Best Egyptian Film in 2019 by the Egyptian Film Syndicate. Besides making movies, Marouan Omara is the managing director of the Arab Independent Film Festival and the Director of the short film competition for the Cairo International Film Festival.

“For documentary filmmakers in developing countries, as they are naming us, it is a big challenge to find financial support. You rarely find enough support from national or regional grants, as documentaries are usually not made for big profit. So, you always need to find some sort of international collaboration,” Marouan Omara explains.

By bringing prominent representatives from the film industries together, CPH:FORUM aims to facilitate the development and financing of documentary film projects with international potential. On one hand, they organise round-table discussions where the attendees can engage in discussions with potential partners. On the other hand, there are the “delegation presentations,” where each delegation presents themselves and their projects, for everyone interested.

“Filmmakers, producers and film festival representatives were all looking for partners, people to invite for our festivals, or co-producers. The conversations were very interesting,” Marouan Omara adds.

Furthermore, a special part of the forum’s program is dedicated to film pitching. Directors and producers from all over the world get to pitch 35 carefully selected projects of documentary features and series in the intersection of non-fiction, fiction, visual art, journalism, and science. This year, Mark Lotfy’s “The Life and Times of Omar Sherif” was among the selected projects.

Making it to the theatres

Having a strong, international network is not only important when it comes to financing films. It’s also a question of distribution.

“Documentaries go nowhere in Egypt. My film was the second documentary that was screened in the movie theatres in Egypt ever, and now it happens maybe every third or fourth year, that a documentary is being screened widely in Egypt. So, you are really depending on having an international audience for your film,” Amir Ramses, another delegation member, says.

Amir Ramses is referring to his documentary Jews of Egypt, which gained wide success both nationally and internationally when it was first released in 2013. Since he graduated from the Egyptian Film School in 2000, Amir Ramses has directed two documentary films and six feature narratives. His latest, Curfew, was screened at the Malmö Film Festival last month. He is also the artistic director of El Gouna Film Festival.

Over the past few years, there has been an increasing interest in Denmark for Arabic films. Egypt was represented by two films at CPH:DOX: As I want by Samaher Alqadi and Ali El Arabi’s Captains of Zaatari.  Also, Denmark has witnessed the rise of several small- and medium-sized film festivals with a special focus on Arabic documentaries.

For many years, Amir Ramses has been looking to CPH:DOX to find inspiration for El Gouna film festival’s program. This year, his experience was different. During the networking events, he got the chance to meet with Danish filmmakers and producers, and gained a more nuanced view of the Danish Film Industry.

“You don’t hear much about the Danish film industry in this part of the world. Like, what TV channels are there, who produces films, who funds films. So, it was very informative to get the chance to talk to some Danish producers and filmmakers. I found out that we have a lot of things in common in the initiatives that we are taking.”

Another special feature of the CPH:DOX festival is its Academy for university students, CPH:ACADEMY. Besides offering free access to the entire program of almost 200 documentary films, the Academy offers classes, lectures, and debates.

“Documentaries provide me with different perspectives on people and the world. They make me question my views, and they give me the possibility to experience something that I might not have been able to experience otherwise,” Hagar el-Beltaji says.

Hagar al-Beltaji is currently finishing her Master’s in Architectural Engineering and Environmental Design and she was one of the ten Egyptian students, who participation in this year’s CPH:ACADEMY under the sponsorship of DEDI.

“One of the classes I attended was a critic class. It was really nice, because we got to discuss movies, and because we got to meet with some of the moviemakers of the films we had watched, and ask them questions, and discuss the movie with them,” Hagar Al-Beltaji says

When asked, if she would recommend the experience to other students, Ms. Al-Beltaji had no doubts:

“It’s a super interesting opportunity, especially for people working with media, movies, or architecture. I would really recommend people to attend next year,” she says.

Nada Riyadh, Co-Founder of the Cairo based production company Felucca Films, and Nadine El Derini, Co-Founder and Director of Masrdotbokra Film Festival, were also part of the Egyptian delegation to CPH:DOX 2021.