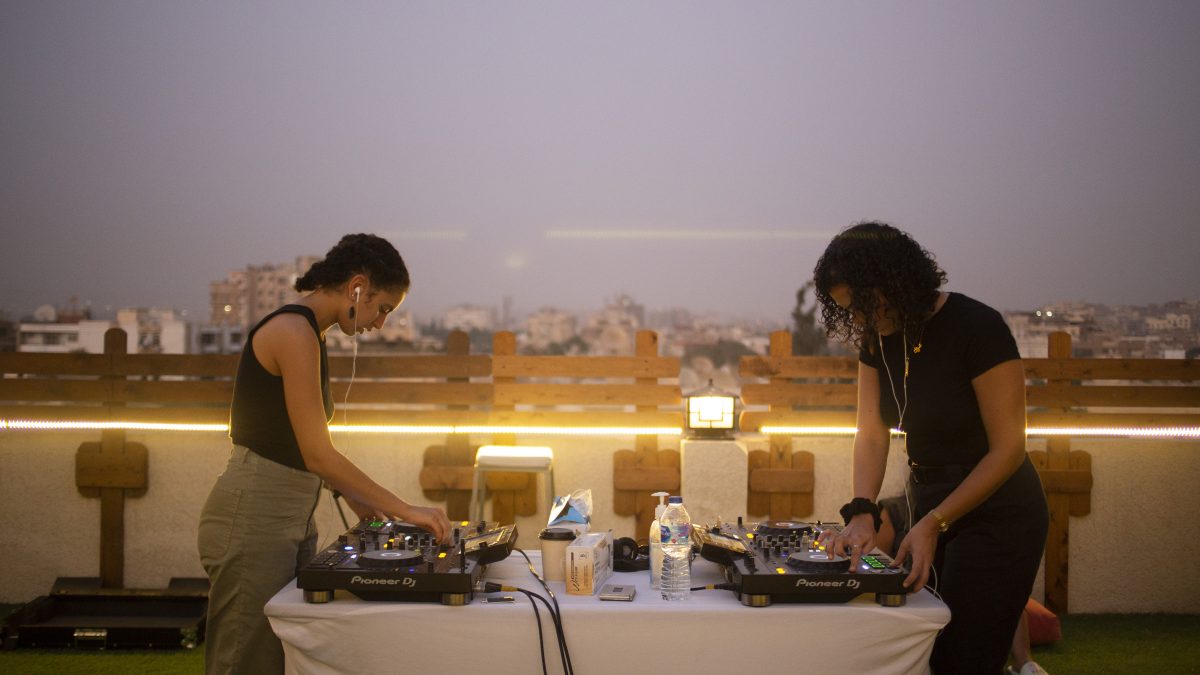 Two powerful female voices gave a three-days all female DJing workshop in Cairo. The workshop aims to empower women in the otherwise male-dominated music industry. It was supported by DEDI.

On a private rooftop in one of Cairo’s more calm and green areas, Maadi, nine aspiring female DJs attended the first Future Female Sounds in Cairo workshop for three evenings in October. The teachers were two of the industry’s most influential women: The Egyptian DJ, producer and founder of Unfamiliar, Zeina, and the Danish DJ Tia Korpe from Future Female Sounds. The aim of the workshop was to provide the participants with the basics of DJing. Later on, some of the girls will be invited to participate in a Masterclass in Copenhagen together with Danish colleagues.

Furthermore, this female only DJing workshop in Cairo was held in order to address the challenge of men dominating the music industry. In Egypt as well as in Denmark, female artists in general are less booked, less paid and less visible than their male colleagues. 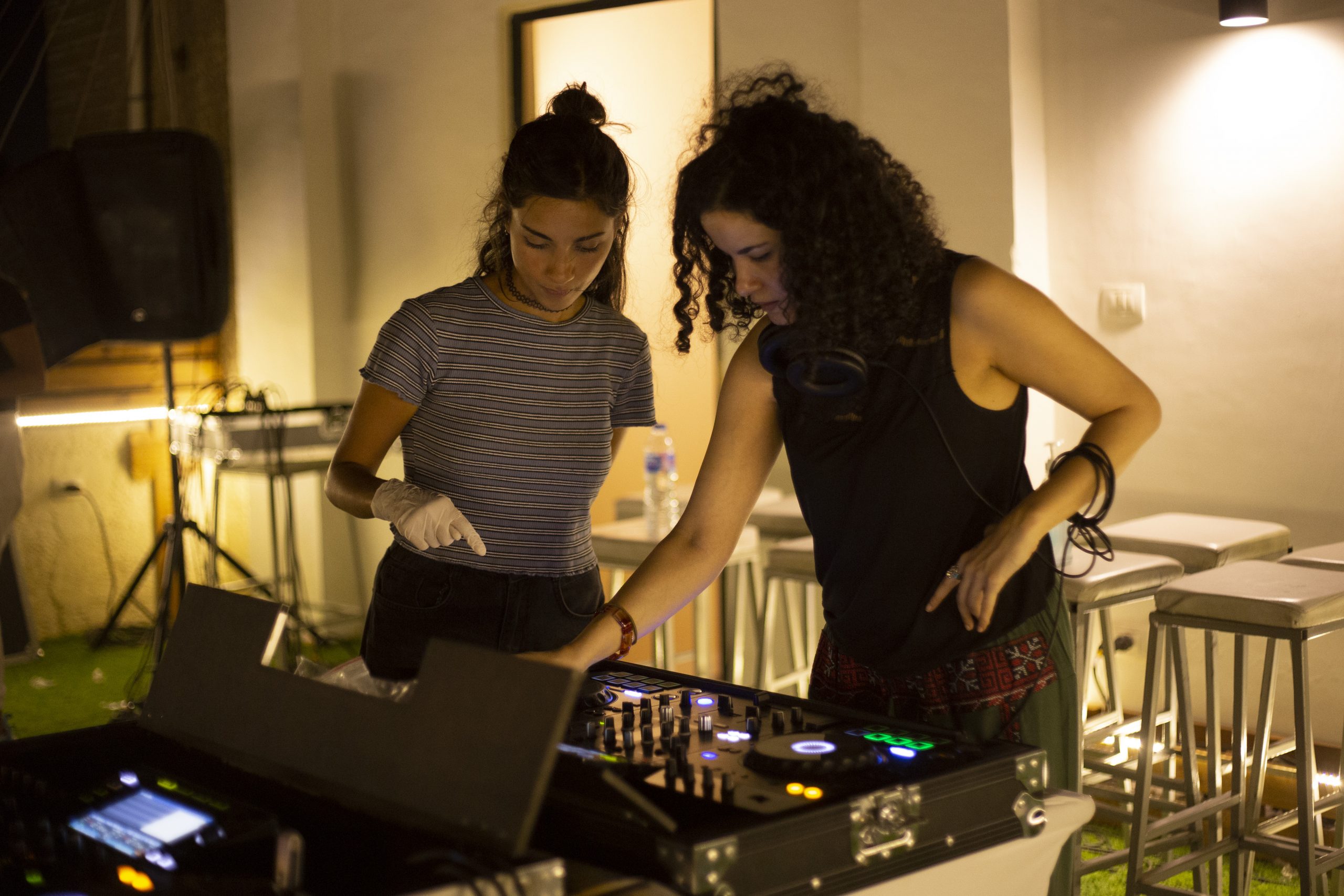 According to Tia Korpe, a DJ is a sonic storyteller. They feel the mood of a crowd, and bring it somewhere else. Throughout the workshop the girls got familiar with both the technical aspects of the DJ profession, such as mixing and beat-matching, as well as introduced to the historical, local and global context. (Photo: Dania Hany)

“I realised, that even though more women were entering the DJ industry in Denmark, only very few of them were booked for gigs. I wanted to change this,” Tia explains. 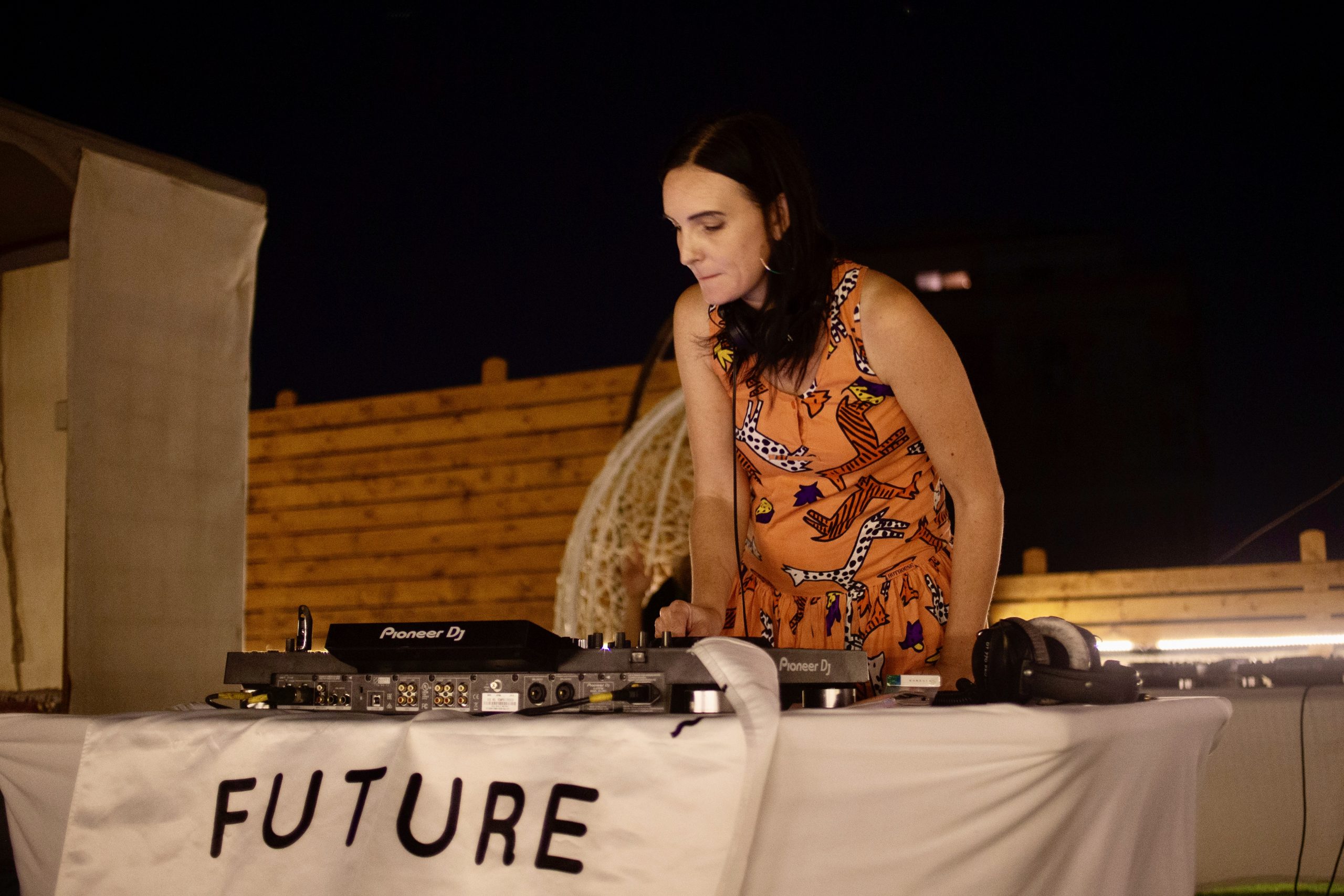 Tia Korpe has more than 10 years of experience working in the music industry as a consultant, event producer, social entrepreneur and DJ. Today, she is the full-time director of Future Female Sounds, an all female booking agency that works to promote female artists and make DJing accessable for girls all around the globe. (Photo: Dania Hany)

Meanwhile, the Agency is also taking up the ambitious mission of making DJing accessible to girls globally.

“We want to reach some of the girls and women who normally would not have access to the DJ culture, and who would never ever have had the chance to learn how to DJ,” Tia says.

The strategy is simple: women teach women and the programs are organized in collaboration with local partners. Proving the model rather successful, Future Female Sounds opened the first DJ Academy for girls in the MENA region in Tunis in 2019.

“Something happens when you create a women-only space. Suddenly, the women have the courage to ask questions, they might otherwise have felt insecure asking. They also feel more relaxed and comfortable about putting themselves in the spotlight,” Tia says. 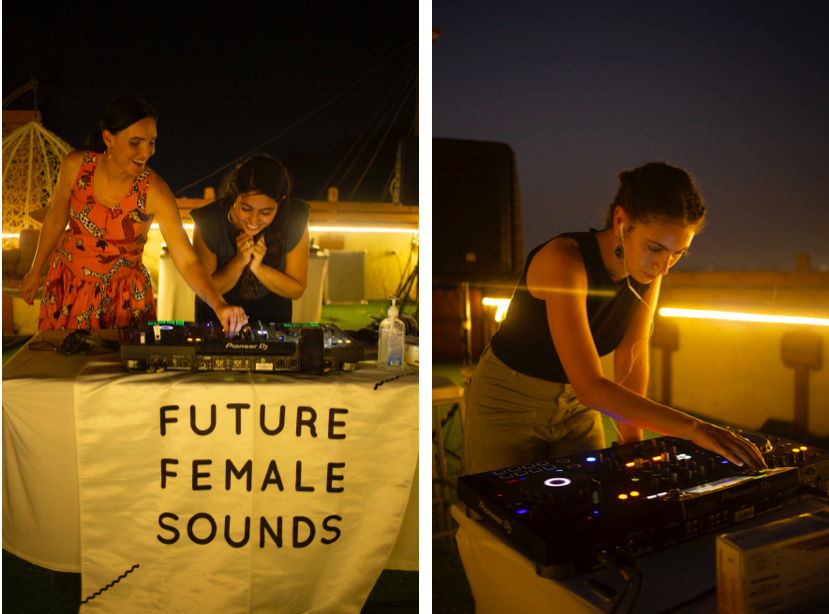 All Future Female Sounds workshops are organized in collaboration with local partners, and taught by women to women. According to Tia, the female-to-female learning model is essential, as it’s gives the girls the possibility to mirror themselves in their mentors: “If you as a young girl can see, that other girls are able to DJ, then you might start to think that ‘hm, maybe I can do this as well’,” Tia explains. (Photo: Dania Hany)

As the name suggests, Unfamiliar is about creating an ‘unfamiliar’ experience, namely, going to an event, where women are in charge of organization, guest lists and line-ups.

“I started Unfamiliar in Cairo five years ago, when I literally experienced that every person I interacted with in my professional life as a DJ was a man. I just wanted to create an experience that made women feel comfortable because it was organized by women,” Zeina explains.

“If you look at any sphere of life, women do it a bit differently. It becomes a different experience when a woman is in charge. When I enter a club, I like to play a game with myself. Without looking, I have to guess if it’s a woman or a man playing, and I always know. A woman simply tells a story in a different way, and I constantly feel like we are experiencing half of life, when we are only experiencing how men do stuff.” 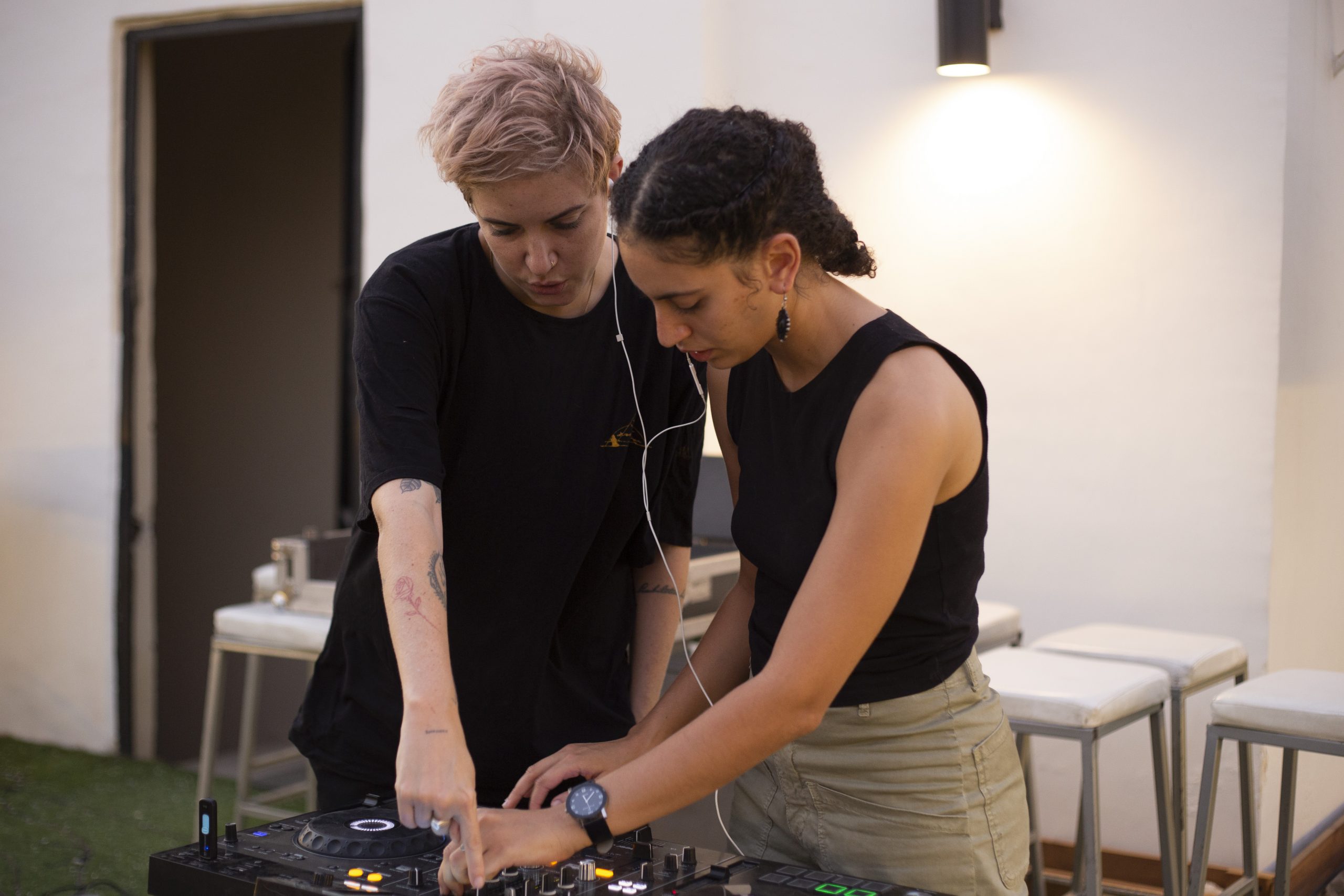 Zeina has been an active member of the Cairo DJ community for the last ten years. Her life took an unexpected turn, when she during her second year of law school, went to a rave party in Canada. Here, she instantly knew that she wanted to delve into the world of the electronic music and the DJ competition, and she has never looked back since. (Photo: Dania Hany)

From her home studio in Maadi, Zeina has run several cycles of private DJ workshops for female friends and acquaintances, who have shown interest in learning. When DEDI asked her if she would be interested in a collaboration with Tia, Zeina didn’t have to think twice.

“I believe that the approach women have towards other women can be more inviting. Personally, I have always done my best to try to create a safe and comfortable environment for my female friends to ask questions about how to DJ, and to try it out. It’s so easy to feel intimidated when you stand in front of the console with all the knobs and cables, but actually you just need to de-mystify the experience.”

On the last evening on the rooftop, the girls are making the final preparations for their graduation sets. Soon each of them will perform a 15-minutes long set in front of the teachers and each other. The girls are chatting comfortably while connecting cables and doing soundchecks, reaching out to Zeina or Tia, when they need technical assistance or support.

Besides sharing their know-how on how to mix, beat-match and use the different types of software, Zeina and Tia have made sure to beat the stereotype that women aren’t as able to handle electronics as men. Yet, it’s neither the technical skills learned nor the ability to troubleshoot that Zeina and Tia find the most important. 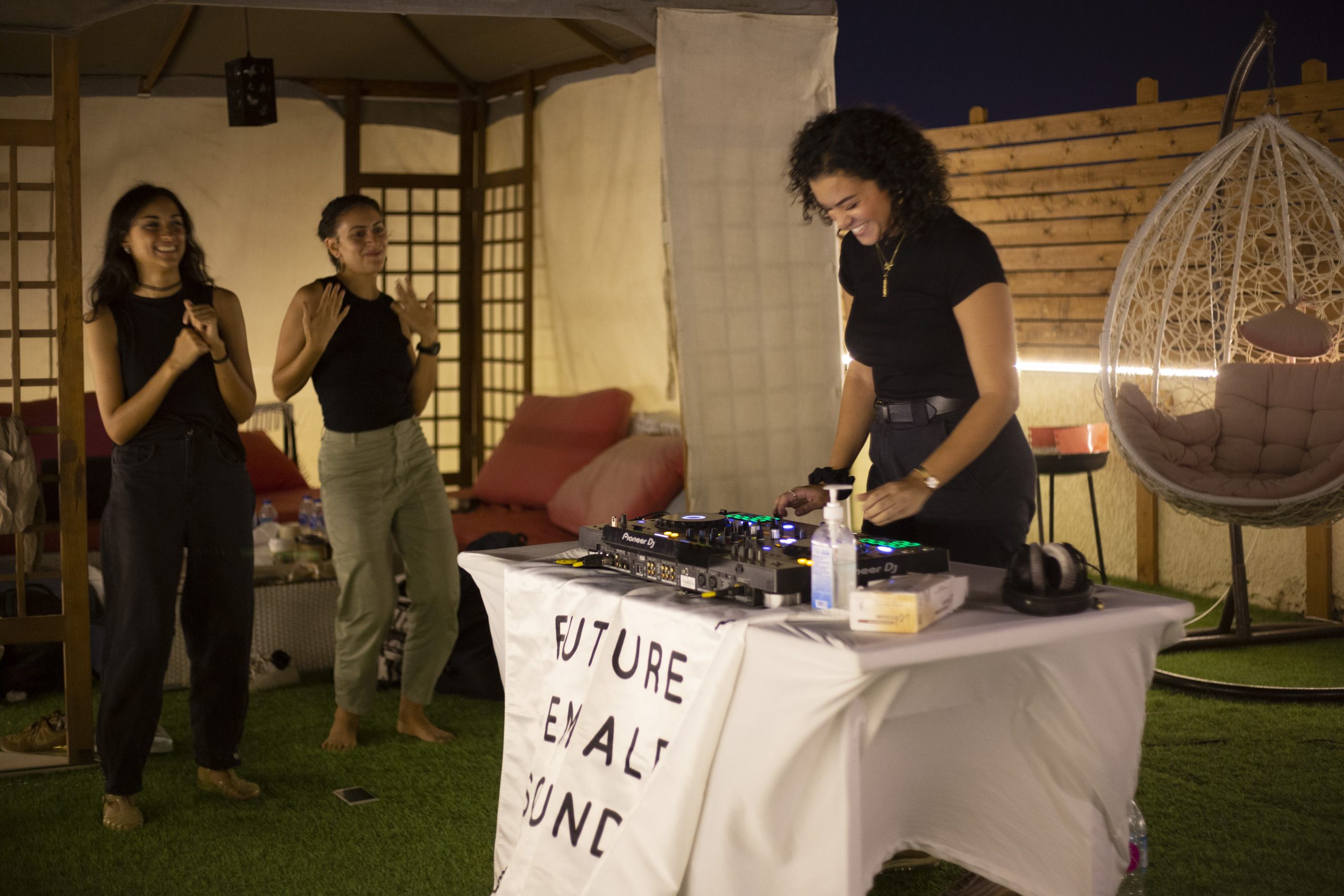 After only 3 days of practice, the girls were ready to play their first mini DJ sets in front of the teachers and each other. Tia hopes, that this is just the beginning: “This pop-up workshop has been good, because it has shown the needs of our DJ babies in Egypt. And they need the same as they do everywhere in the world, which is a safe place where they can go to learn and grow together.” (Photo: Dania Hany)

Especially in Egypt, where many of the gigs are organized privately by various DJ collectives, being part of a community has shown to be a successful way to enter the scene.

“A lot of people, especially the younger guy DJs coming out now, are throwing parties together, because they are new and want to be booked. So, I think that the more female DJs that are skilled, and the more communities you are building, the more it’s likely that a group of these girls will create their own opportunities,” Zeina says. 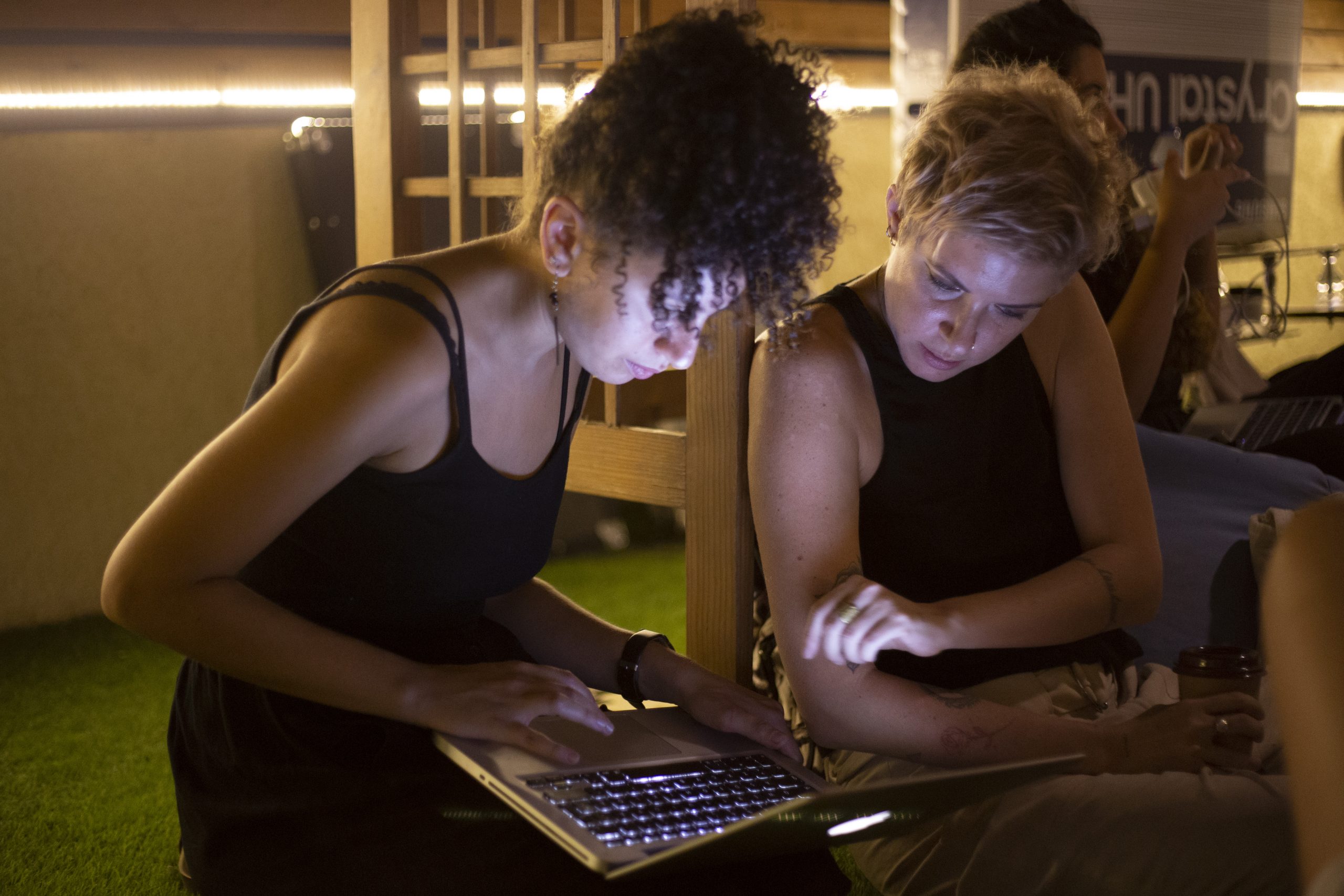 “I need to live in a world were women contribute with their voice.” For this reason DJ Zeina founded Unfamiliar, one of the very few DJ collectives in Egypt, that highligt and promote female artists in the electronic music scene. (Photo: Dania Hany)

For now, there are plenty of reasons to be optimistic. New relations have been established, and some of the girls will go to Copenhagen. This will give them a chance to gain an international experience and to expand their networks further.

The Future Female Sounds in Cairo Project is managed by DEDI’s Project Officer Sarah Bahgat. She has talked to VICE about the all-female workshop. Read the article HERE (Arabic)