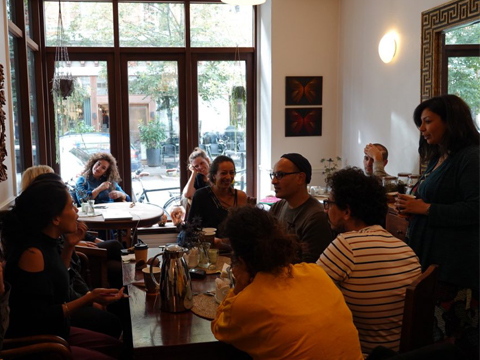 In DEDI’s new podcast, Danish and Egyptian writers explore language as a tool to overcome moments of crisis.

Is it possible to heal through language? Eight Egyptian and Danish writers explore the healing power of language in the podcast Writing through Crisis, created by Sarah Bahgat from DEDI. Reading a different literary text for each episode, the writers draw on their own experiences and shed light on how language navigates in moments of crisis.

The podcast is based on a five-day writing and translating summer school facilitated by writer Haytham El-Wardany and literary critic Nazila Kivi that took place in Aarhus, September 2019. Here, the participants were exploring writing as a tool for individual recovery from traumatic experiences, as well as for collective trauma processing and narrative shaping. The podcast is sharing the experience of the readings and the outcome of the following discussions. It consists of six episodes of which the first and last episode act as introduction and postlude, and the four other episodes highlight different aspects of language in times of crisis. They are narrated by Egyptian writer Charles Akl, who introduces the speakers and describes surrounding architecture, group dynamics, weather changes, and atmosphere.

Desire becomes the main subject of the Podcast. Writing in moments of crisis is strongly connected to desire in terms of a desire of moving on, of understanding the individual within the crisis, of taking a stand, or maybe just to simply grasp what is happening. Throughout the podcast the participants are trying to locate this desire by asking what happens when it dries out, and how to create new desires.

Writing in a foreign language

Following the reading of the Lebanese American writer and artist, Etel Adnan’s essay To Write In A Foreign Language, the participants contemplate on the issues of literary writing in foreign languages in the podcast’s second episode. Born in Beirut but raised speaking French, the essay presents Adnan’s dilemma of being multi-lingual. Due to the political situation in the 1950s between French and Arab countries, she became unsure of what language to write in. “I realized that I couldn’t write freely in a language that disturbed me,” she writes in her essay. “I soon realized that to me this meant a new language and a solution to my dilemma: I didn’t need to write in French anymore. I was going to paint in Arabic”. During the discussion, the writers discover the power of the cultural context of a language. In moments of historical conflicts or war writers might have a desire to express themselves in an impartial language to be able to detach themselves from their side of the conflict. In Denmark, for example, there is an elderly generation of German-bilingual Danes, who still today feel ashamed of their German (second language), as they relate it to the second world war. Likewise, Hebrew speaking Egyptians today are afraid of carrying the legacy of the Egyptian-Israeli war.

In the third episode, the authors read a part of the Brazilian writer Suely Rolnik’s text Deleuze, Schizonanalyst, describing how she escapes from a totalitarian regime and finds refuge in France. She decides to forget her mother tongue and adapt to French and soon, she is able to see the bigger picture and express insights she was not able to even think in her mother tongue. “The poison (harmful memories) seems to be mediated in language,” one of the participants notices. “It seems as if the author tries to petrify this language to protect herself from the poison”. It’s interesting as it highlights the power of language as much as it shows its limits in moments of crisis. The trauma becomes manifest in Rolnik’s language, as she is no longer able to express certain things in her mother tongue. Simultaneously, it’s also through language – her new second language – she fills in the gaps of the missing words. The new language becomes the channel through which she can access the trauma.

“I needed to write to survive”

Unique is, how the participants are able to draw on their own experiences of writing in times of crisis. In this way the discussion following the readings are a way for the participants to contemplate on their own motives for writing as much as an analysis of the literary text. “I needed to write to survive the time in Beirut, but I couldn’t address my trauma through a novel. I needed to see it first to accept its existence; to start at least to understand what it is and then begin to express and deal with it,” says the Lebanese-Egyptian writer Sahar Mandour, one of the participants. Describing her writings on the Lebanese civil war as a way of surviving in Beirut, a paradox rises as writing becomes both the cure, and the journey to find the cure. She writes because she wants to understand the traumatic experience of the war. Yet, it is not possible to convert what she understands into a novel, as her experiences, due to the traumatic force of the event, still haven’t turned into memories that she can narrate.

Furthermore, the podcast provides an interesting perspective on the challenges of translations, highlighted in the fifth episode. Here, the participants discuss the possibility of translating poems. Are they translatable? What is the translator able to achieve and what not? Sharing their experiences, the participants suggest that what is transmitted by translation is the poetic sense perceived by the translator. This means an acceptance of a partial defeat of the translator, as there are only subjective understandings of poems. Translating relies on choices.

The podcast is hosted by writer Charles Akl, created, and produced by Sarah Bahgat/the Danish Egyptian Dialogue Initiative (DEDI) and sound designed/edited by filmmaker Nadine Salib. It is based on the recordings of a five- days summer school of writing and translation that took place September 2019 at Moesgaard Museum, Aarhus, Denmark.

Listen to the podcast  HERE

The project was managed by DEDI’s Project Manager, Sarah Bahgat.