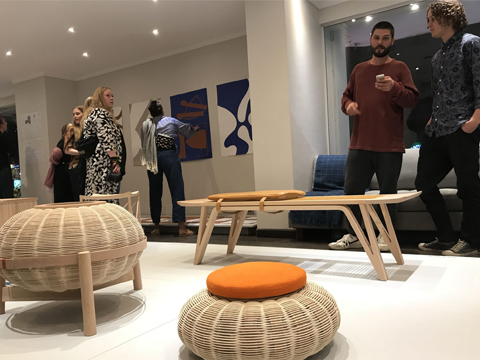 What happened to the furnitures? Six months later, participants of the Danish-Egyptian design-project “Bilingual Furniture” recall their memories and reflect on their experiences.

“It’s all about the energy you bring.” Such are the words, when Sia Hurtigkarl is asked by DEDI to sum up her experience of the joint Danish-Egyptian design-project “Bilingual Furniture” organized by DEDI. She also recalls the sudden ability to communicate without a shared language:

“Normally, it’s all about choosing the right words to communicate one’s ideas, but here everything was body language, smiles and having coffees together.”

Sia Hurtigkarl is studying design at the Royal Danish Academy of Architecture and Design (KADK). Together with 17 fellow students she took part in a collaboration with a group of young Egyptian designers and the Pinocchio Furniture Factory last November.

All in all, 11 prototypes of furniture as well as visual designs and handicrafts were designed and produced. Inspired by the images of women, carrying round-bottomed jars on the top of their heads in ancient Egypt, Sia Hurtigkarl and her teammate created Fellah, a round seat wicker chair with a storage inside.

The work was exhibited at the Bilingual Furniture Exhibition in Cairo, and later at the KADK Open House event in Copenhagen. Some of the pieces, including Fellah, will furthermore be showcased at the Danish 3 Days of Design-festival later this year.

The project challenge participants to reinterpret pharaonic designs and create modern furniture designs with the aim of bringing Danish and Egyptian designers and producers together to share, discover and reflect upon the rich heritage of the two countries. 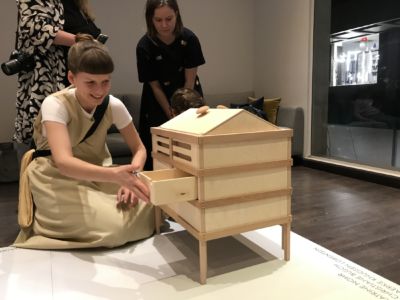 The furniture ‘Aman’ at the Billingual Furniture Exhibition in Cairo

“There are many beautiful elements in the pharaonic designs,” Katrine Nøhr, one of the Danish students, tells DEDI. Her furniture design, Aman, a luxurious storage and display cabinet, is drawing on inspiration from the secretive structure of the pyramid’s narrow passages leading to valuable chambers, shrines and treasures. “They have so many beautiful solutions for furniture feet, curves and folding beds, that it’s hard not to feel inspired.”

Visibly reflecting inspirations from pharaonic design, the prototypes add another chapter to a fascinating history of cultural exchange: The 1950s iconic Danish designers were highly inspired by the strict yet graceful geometric symmetry that characterize pharaonic design.

“I actually think that the challenge is not to be inspired too much,” Katrine elaborates. “A part of the process has been to strike the right balance. When arriving in Cairo, my two team-mates and me, were keen on incorporating some of these beautiful wings one finds on many ancient Egyptian shrines to the design. But the Egyptian designers suggested to use a more modern pattern for our design as the wings in their opinion were a bit too ‘ancient’. In this way, we could really use each other to find the adequate compromises.”

“As Egyptian designers, we often care about the design’s shape,” Lina Lasheen, one of the participants, tells DEDI. “The Danes, however, care about the exact details, like how to construct the small parts of the design. This different way of working had a huge impact on the production of a two-cultural design.”

Different notions of quality are highlighted by both Egyptian and Danish participants as an unexpected experience made from the collaboration. An experience that on one hand made the participants question their own perception of aesthetic values, and on the other hand broadened their perspectives of the standards of designs.

“One of the things I learned from the meeting with Pinocchio, was that I couldn’t take for granted that we all share the same standards of quality or aesthetic ideals,” explains Sia Hurtigkarl. “In Denmark, for example, we think that solid wood is the most luxurious material to work with, but that does not mean that an Egyptian craftsman cannot think that plywood can be just as fine.”

She adds: “I think that a reason for the success of the collaboration was, that we suddenly had to reflect on how we wanted our designs to look, and why. Where we (the Danes) started the collaboration with a lot of ideas, which in some cases turned out to be utopian, the Egyptians entered with an impressive knowledge on how to do their craftwork. And I think that we were good at pushing each other’s limits to achieve amazing results.”

The meeting with the only Arabic speaking carpenters of Pinocchio Furniture Production became an eyeopener to the Danish design students as they realized that you are able to communicate without a common language to a surprising extent.

“Lack of a common language is only a limit if you make it one,” says Katrine Nøhr. “Especially, when you have something as specific to collaborate on as a craft. It speaks for itself. It really doesn’t matter that you don’t speak the same language.”

Katrine Nøhr explains: “For our project it was very important, that all the measurements were exact. We knew, that for us to be satisfied we had to go down to the carpentry and supervise the production, just to make sure, they understood our instructions correctly. With a little humor and good will, communication can really work across languages — this is something I’ll remember for other international projects in the future.”

Today, the Danish market for furniture depends mainly on Eastern Europe for large-scale manufacturing. Starting the collaboration with DEDI and KADK in 2017, Amr Oransa, CEO of Pinocchio Furnitures, hopes for a wider Danish-Egyptian furniture collaboration in the future.

“I believe that Egypt has the potential in the future to replace Eastern Europe as a manufacturer of furniture for Denmark,” he says. “But of course, this requires some modifications in manufacturing models and methods.”

As for the Egyptian participants, growing interest in foreign markets was one of the outcomes of the collaboration, since the young designers became more aware of their country’s design-heritage. Likewise, it was a good opportunity to create cross-border partnerships.

In Denmark, the pharaoh-inspired designs were well received, as three of the designs were chosen to be exhibited at the 3 days of Design-festival taking place in Copenhagen in September 2020. Furthermore, Sia Hurtigkarl hopes to see fellah in production as soon as the COVID-19 situation allows it. As for the Egyptian designers, several got interesting offers from producers during the exhibition in Cairo and a bench created by Aya Khedr is now being produced by Pinocchio.

The project was managed by DEDI’s Program Manager, Mohamad Abotera