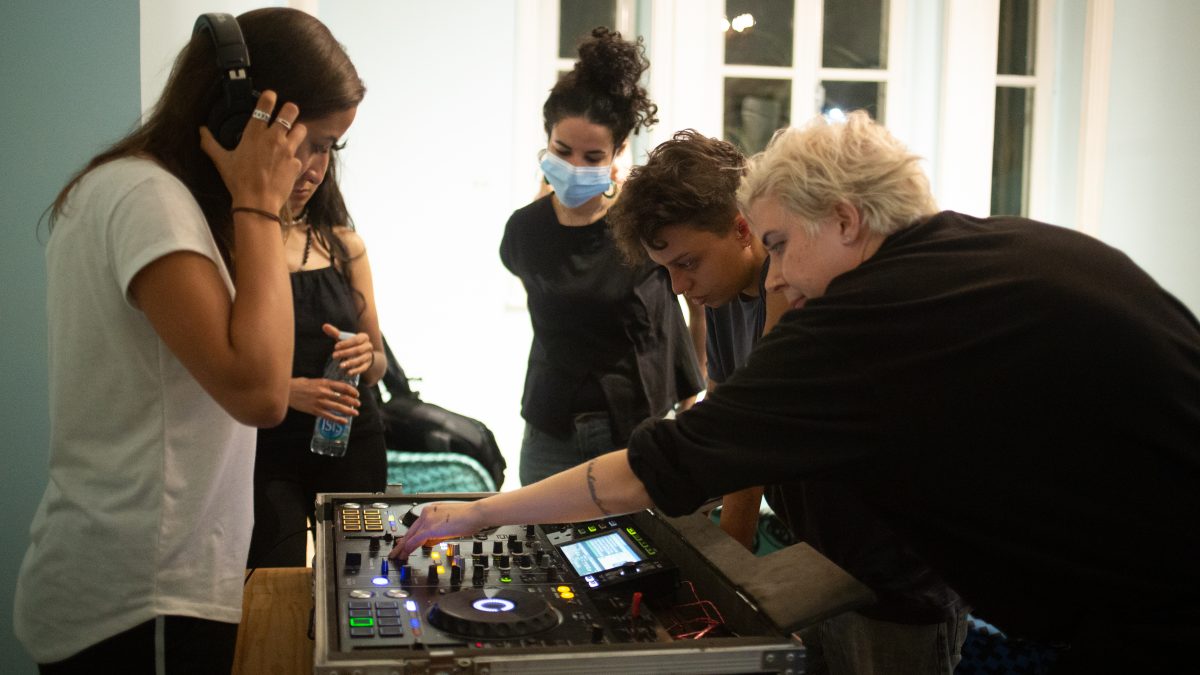 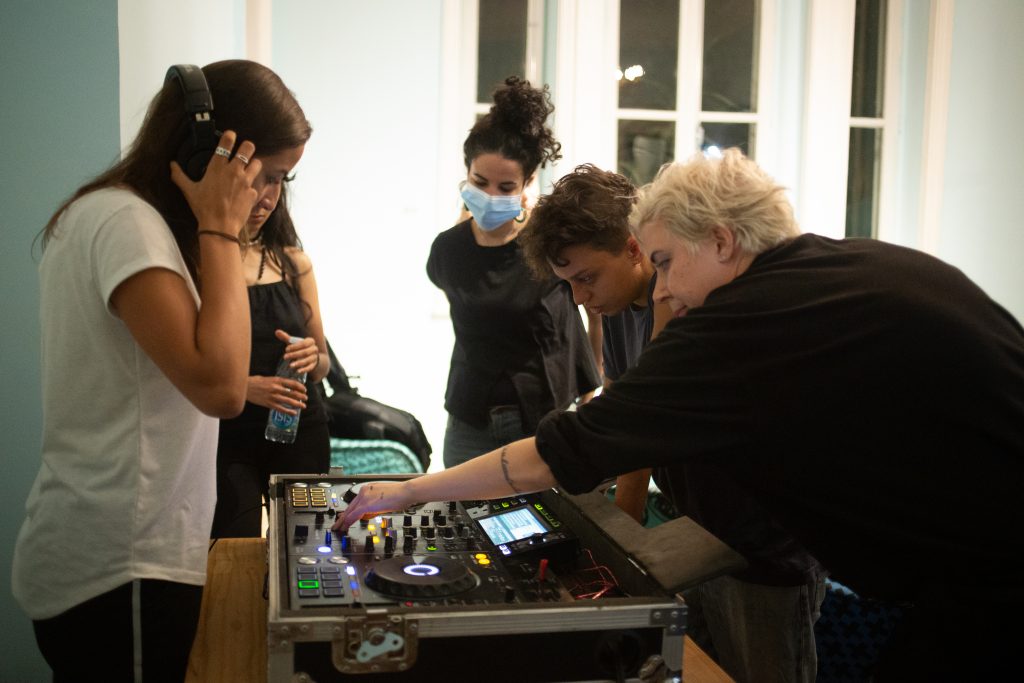 A DEDI-sponsored Masterclass brings Danish and Egyptian female DJs together.

What is looping? How do I brand myself as a DJ? How do I prepare for gigs and negotiate booking fees?

These were the topics of the second DEDI-sponsored Future Female Sounds in Cairo Masterclass, that aimed to bring Danish and Egyptian female DJs together.

The project started last autumn when Tia Korpe from Future Female Sounds, a Copenhagen-based female booking agency, teamed up with the Egyptian DJ, Producer, and Founder of Unfamiliar, Zeina, to give a three-day all-female DJ workshop in Cairo. In April, the participants met again to attend a second, more advanced Masterclass, and this time Danish peers joined them over Zoom.

The project encourages Danish and Egyptian female DJs from different level of experience to get together and learn from each other. The main aim is to brainstorm and troubleshoot the problems female DJs face from the moment they decide to pursue a DJing career to the fight for equal opportunities on the turntable. 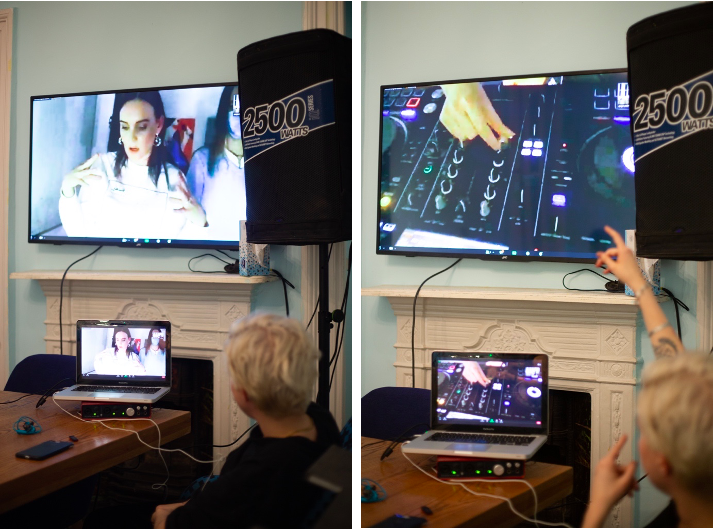 A world of men

“I started DJing when my friend opened his studio in Maadi. I used to go every day after work, just to mix for six hours straight. Without anyone’s help, and without anyone listening. I just used to go to the studio and mix all on my own.”

26-year-old Mariam Afifi started DJing around six years ago. Coming from a family of music enthusiasts, music has always run in her blood, and she knew that DJing was her thing ever since she first started to listen to electronic music. Yet, the opportunities for women to take DJ classes in Cairo are rare, so when Mariam saw the flyer for the first Future Female Sounds in Cairo workshop, she immediately knew that she had to apply.

“In the studio, I used to go to, there were no girls at all. It was literally only me, and a bunch of guys. So, it was really nice to see that someone is actually working on training female DJs in Egypt specifically because the scene here is really not that welcoming.” 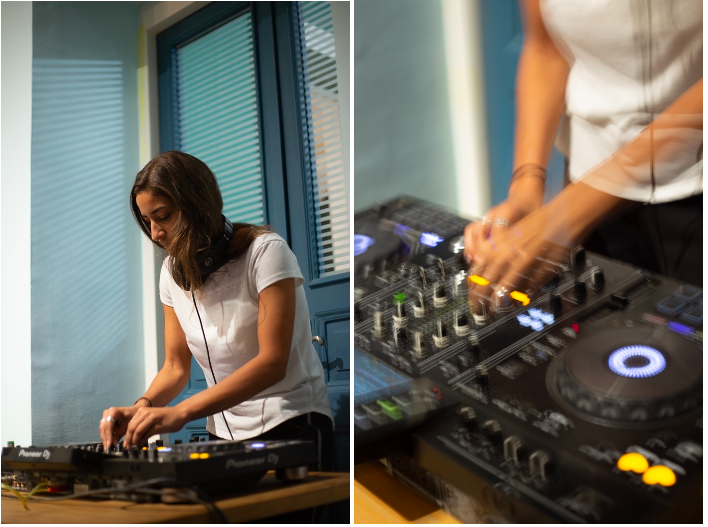 “I used to go to parties or events, where my friends were DJing, and I would just stand there next to them looking at their mixing techniques. And I guess ever since then I have become obsessed with music and DJing” Mariam Afifi, one of the participants of the Future Female Sounds in Cairo workshops recalls, thinking back on how she started DJing. Photo: Dania Hany

Also, 24-year-old Nada Sherdy found herself as the only woman in a world of men when she first started DJing back in 2016.

“I started DJing when I went to study in New York City. On campus, there were a lot of DJs. Every time we went to a party, there would be a different DJ, but they were all men. I started telling myself that DJing was interesting and that I would like to try it. But every time I asked one of the guys for help or mentorship, they wouldn’t take me seriously.”

For Nada, this was only an added reason to pursue DJing. She resorted to Youtube, watched tutorial videos, bought cheap DJ gear from Amazon, downloaded a free music software, and started teaching herself how to DJ. After a while, she began to upload her mixes on Soundcloud for her friends and family to enjoy.

“I had just moved back to Cairo from the States when I by coincidence saw the call for the Future Female Sounds in Cairo workshop. Honestly, I didn’t know much about the music scene in Cairo at that time, but I hadn’t heard any female DJs who had a similar sound to mine. So, I was just so excited to see that this, a female-only DJ workshop, was even a thing.” 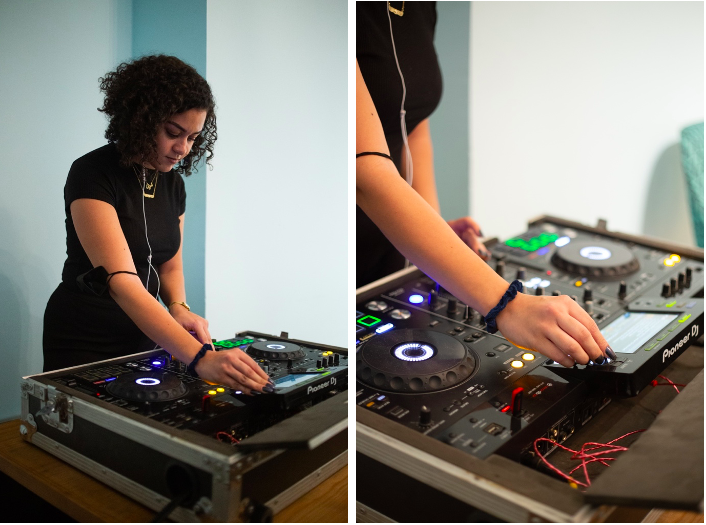 Nada Sherdy, one of the participants, has always been into music. “Ever since I was younger, I always loved music, and people would always tell me that I had a good ear. If we were at a social gathering my friends would always encourage me to be the one with the AUX cord, so I always loved being that person to people” Photo: Dania Hany

All over the world, female DJs struggle to get the same number of bookings, the same fees, and the same visibility as their male colleagues. Therefore, having a network of fellow female DJs can be a game-changer, especially in the early stages, when trying to get recognized and enter the scene. 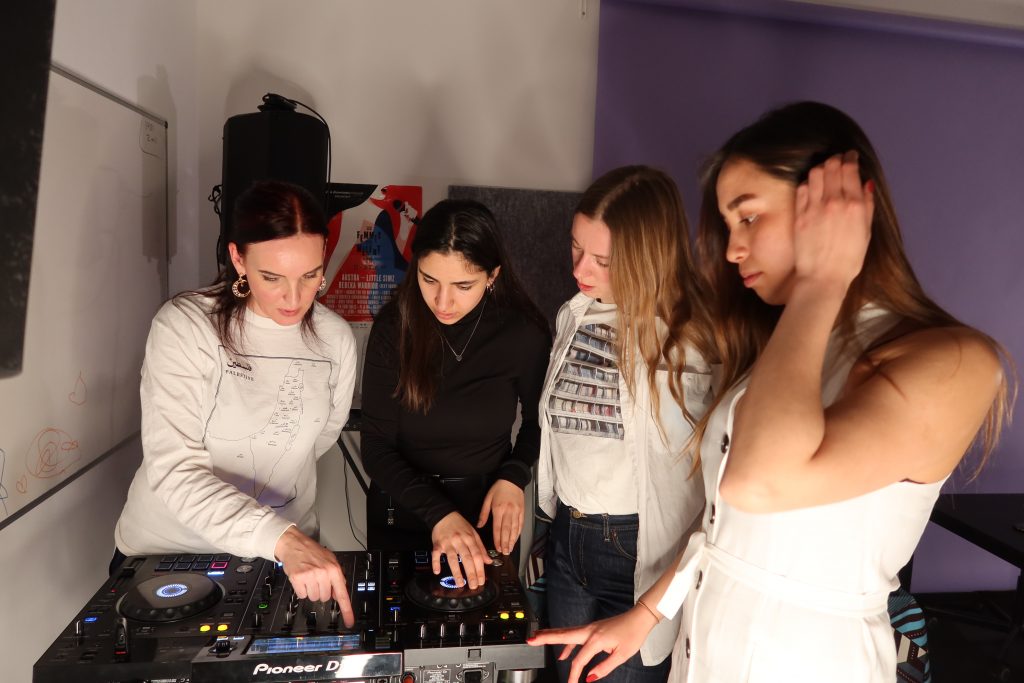 Future Female Sounds are on an ambitious mission to create a local and global community for female DJs. Besides promoting female artists, the booking agency also organizes DJ programs, workshops, masterclasses, and network meetings in Denmark and abroad.

“When I heard about Future Female Sounds some years ago, they showed me that there’s a community and a network of female DJs,” Savan Mohammad-Amen, one of the Danish DJs participating in the workshop, says. “They also had an online forum where I could ask all of my nervous beginner questions without feeling embarrassed which I really appreciated. They helped me feel empowered and connected to fellow DJs.”

Savan, also known as DJ LoveCatt, began DJing around three years ago when a friend’s gentle push and guidance encouraged her to start. Today, you can book her for gigs through Future Female Sounds, and she has played her soft funk, electronica, house, and disco tunes at various events and festivals in Denmark such as Techfestival, Silent Disco, Nørrebro Pride, Union, and Culture Box.

“One of the things that I liked about the Future Female Sounds in Cairo workshop was that I got the opportunity to digitally meet and share knowledge with the DJs from Cairo,” Savan says. “It is amazing hearing and seeing people who love DJing all over the world and there is so much I can learn from them. It is extremely important to meet and see DJs like myself. I can never stress how important representation is, and I wished I saw that when I was younger.” 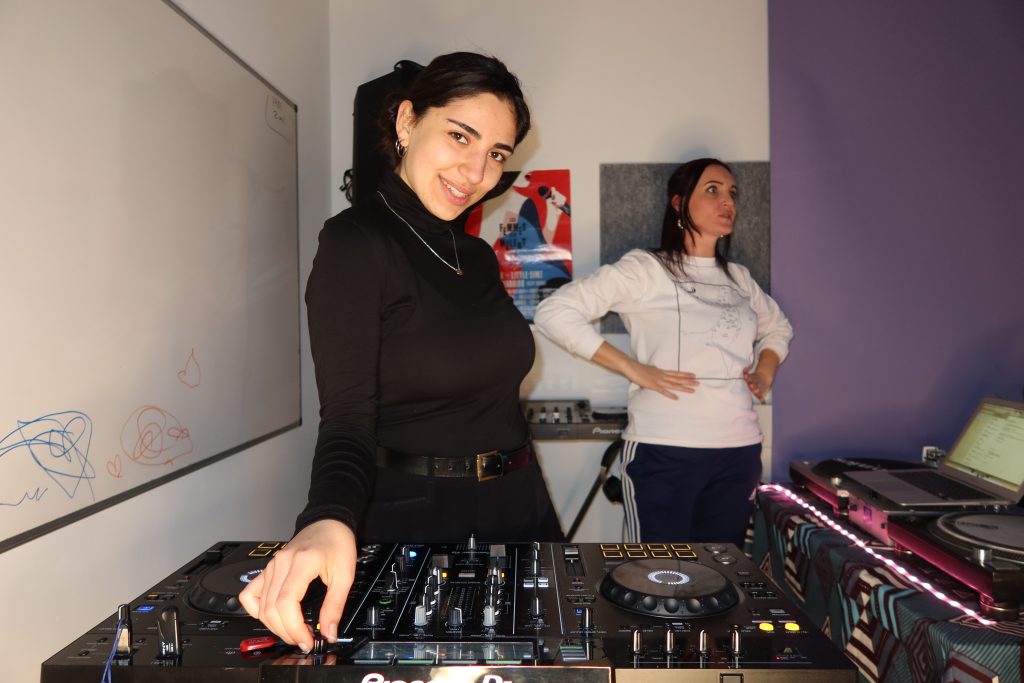 “A thing I still struggle with within the scene is that I find it strange that I mostly get mentioned as a female DJ.” Savan, one of the Danish participants, says. “I’m not trying to distance myself from my gender, but it makes me feel like a token or a gimmick. We don’t say a female doctor or female carpenter, so why saying ‘female DJ?’”  Photo: Aviaja Larsen

Also by talking to the Egyptian DJs, it becomes clear that it was neither the improvement of technical skills nor the newly gained knowledge on self-branding that made the biggest impression on them.

“My favorite thing about the workshop was networking for sure,” Nada said.

“The best thing about the workshops was to meet all of these girls from different backgrounds and getting to know why they are into music, why they started mixing, and which genres they are into,” Mariam added.

Since the first Future Female Sounds in Cairo workshop, many of the participating Egyptian DJs have started to gain their first professional experiences. Nada, also known as NEDZ, played several times at the Tap bars in Cairo, and this Wednesday, you can experience her in a back-to-back with the Cophenagen based DJ Sepii for two hours on boxout.fm.

Also Mariam is flirting with the idea of starting to prepare mixes for radio stations and podcasts.

One thing is for sure. All three DJs have no second thoughts about continuing to control the turntable and make mixes in the future.

As Mariam puts it:

“DJing is not something that I’ll quit soon. It’s in my blood.” 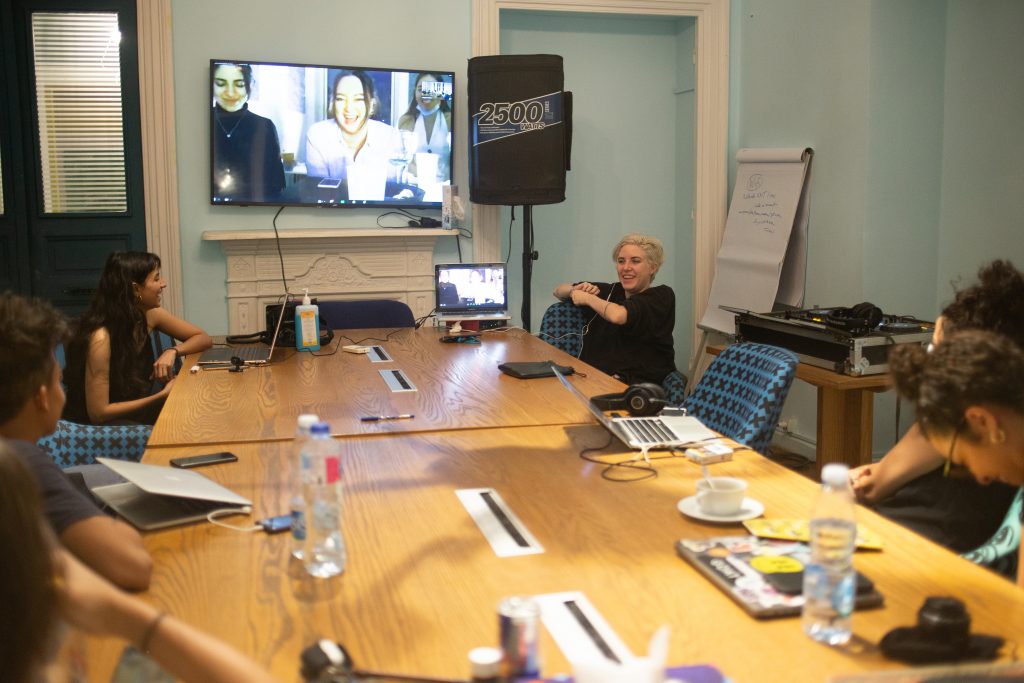 Danish and Egyptian DJs sharing experiences over Zoom as a part of the second Future Female Sounds in Cairo Masterclass taking place simultaneously in Copenhagen and Egypt. Photo: Dania Hany 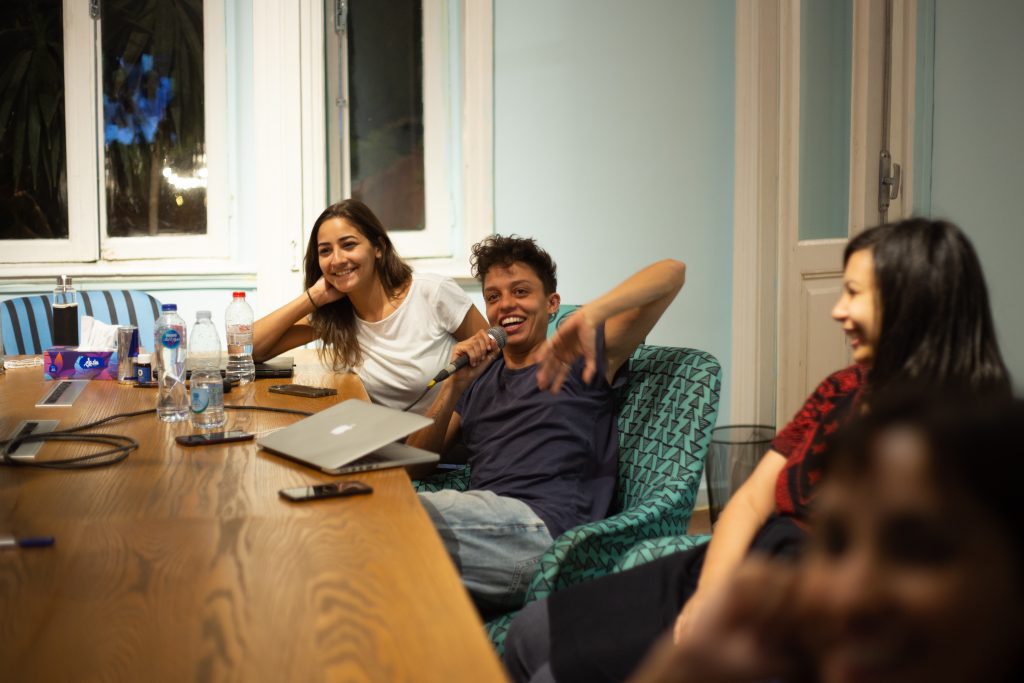 Sarah Bahgat from DEDI has talked to VICE about the all-female workshop. Read the article HERE (Arabic)

Photos are taken by Dania Hany and Aviaja Larsen.